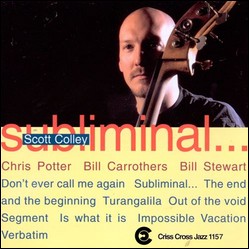 Born on November 24, 1963, Colley began studying bass at age 11. At 13, he studied with bassist Monty Budwig. He attended Eagle Rock High School in Los Angeles, where he studied under John Rinaldo. After graduating from high school, he was granted a scholarship to the California Institute for the Arts and studied privately with Charlie Haden and Fred Tinsley (of the Los Angeles Philharmonic). In 1986, he began touring and recording with jazz singer Carmen McRae. After graduating in 1988, he moved to New York City.

This article uses material from the article Scott Colley from the free encyclopedia Wikipedia and it is licensed under the GNU Free Documentation License.