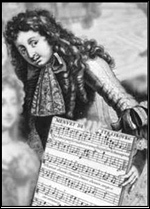 Exceptionally prolific and versatile, Charpentier produced compositions of the highest quality in several genres. His mastery in writing sacred vocal music, above all, was recognized and hailed by his contemporaries.

Any family relationship between him and Gustave Charpentier, the late-nineteenth and early-twentieth century French opera composer, is highly unlikely.

Charpentier was born in or near Paris, the son of a master scribe who had very good connections to influential families in the Parlement of Paris.[2][3] Marc-Antoine received a very good education, perhaps with the help of the Jesuits, and registered for law school in Paris when he was eighteen.[4] He withdrew after one semester. He spent "two or three years" in Rome, probably between 1667 and 1669,[5] and studied with Giacomo Carissimi. He is also known to have been in contact with poet-musician Charles Coypeau d'Assoucy, who was composing for the French Embassy in Rome. A legend claims that Charpentier initially traveled to Rome to study painting before he was discovered by Carissimi. This story is undocumented and possibly untrue; at any rate, although his 28 volumes of autograph manuscripts reveal considerable skill at tracing the arabesques used by professional scribes, they contain not a single drawing, not even a rudimentary sketch. Regardless, he acquired a solid knowledge of contemporary Italian musical practice and brought it back to France.

Immediately on his return to France, Charpentier probably began working as house composer to Marie de Lorraine, duchesse de Guise, who was known familiarly as "Mlle de Guise." She gave him an "apartment" in the recently renovated Hôtel de Guise – strong evidence that Charpentier was not a paid domestic who slept in a small room in the vast residence, but was instead a courtier who occupied one of the new apartments in the stable wing.[6]

For the next seventeen years, Charpentier composed a considerable quantity of vocal works for her,[7] among them Psalm settings, hymns, motets, a Magnificat setting, a mass and a Dies Irae for the funeral of her nephew Louis Joseph, Duke of Guise,[8] and a succession of Italianate oratorios set to non-liturgical Latin texts. (Charpentier preferred the Latin canticum to the Italian term, oratorio). Throughout the 1670s, the bulk of these works were for trios.[9] The usual trio was two women and a singing bass, plus two treble instruments and continuo; but when performance in the chapel of a male monastic community required male voices, he would write for an haute-contre, a tenor and a bass, plus the same instruments. Then, about 1680, Mlle de Guise increased the size of the ensemble, until it included 13 performers and a singing teacher. In the pieces written from 1684 until late 1687, the names of the Guise musicians appear as marginalia in Charpentier's manuscripts – including "Charp" beside the haute-contre line.[10] Étienne Loulié, the senior instrumentalist who played keyboard, recorder and viole, probably was entrusted with coaching the newer instrumentalists.

Despite what is often asserted, during his seventeen years in the service of Mlle de Guise, Charpentier was not the "director" of the Guise ensemble. The director was a gentleman of Mlle de Guise's court, an amateur musician, Italophile, and Latinist named Philippe Goibaut, familiarly called Monsieur Du Bois. Owing to Mlle de Guise's love for Italian music (a passion she shared with Du Bois), and her frequent entertaining of Italians passing through Paris,[11] there was little reason for Charpentier to conceal the Italianisms he had learned in Rome.

During his years of service to Mlle de Guise, Charpentier also composed for "Mme de Guise", Louis XIV's first cousin.[12] It was in large part owing to Mme de Guise's protection that the Guise musicians were permitted to perform Charpentier's chamber operas in defiance of the monopoly held by Jean Baptiste Lully. Most of the operas and pastorales in French, which date from 1684 to 1687, appear to have been commissioned by Mme de Guise for performance at court entertainments during the winter season; but Mlle de Guise doubtlessly included them in the entertainments she sponsored several times a week in her palatial Parisian residence.

By late 1687, Mlle de Guise was dying. Around that time, Charpentier entered the employ of the Jesuits. Indeed, he is not named in the princess's will of March 1688, nor in the papers of her estate, which is strong evidence that she had already rewarded her loyal servant and approved of his departure.

During his seventeen-odd years at the Hôtel de Guise, Charpentier had written almost as many pages of music for outside commissions as he had for Mlle de Guise. (He routinely copied these outside commissions in notebooks with Roman numerals.) For example, after Molière's falling out with Jean-Baptiste Lully in 1672, Charpentier had begun writing incidental music for the spoken theater of Molière. It probably was owing to pressure on Molière exerted by Mlle de Guise and by young Mme de Guise that the playwright took the commission for incidental music for Le Malade imaginaire away from Dassoucy and gave it to Charpentier. After Molière's death in 1673, Charpentier continued to write for the playwright's successors, Thomas Corneille and Jean Donneau de Visé. Play after play, he would compose pieces that demanded more musicians than the number authorized by Lully's monopoly over theatrical music. By 1685, the troop ceased flouting these restrictions. Their capitulation ended Charpentier's career as a composer for the spoken theater.[14]

In 1679, Charpentier had been singled out to compose for Louis XIV's son, the Dauphin.[15] Writing primarily for the prince's private chapel, he composed devotional pieces for a small ensemble composed of royal musicians: the two Pièche sisters singing with a bass named Frizon, and instruments played by the two Pièche brothers. In short, an ensemble that, with Mlle de Guise's permission, could perform works he had earlier composed for the Guises. By early 1683, when he was awarded a royal pension, Charpentier was being commissioned to write for court events such as the annual Corpus Christi procession. In April of that year, he became so ill that he had to withdraw from the competition for the sub-mastership of the royal chapel. Speculations that he withdrew because he knew he would not win seem disproved by his autograph notebooks: he wrote nothing at all from April through mid-August of that year, strong evidence that he was too ill to work.

From late 1687 to early 1698, Charpentier served as maître de musique (music master) to the Jesuits, working first for their collège of Louis-le-Grand (for which he wrote David et Jonathas and where he was still employed in April 1691)[16] and then for the church of Saint-Louis adjacent to the order's professed house on the rue Saint-Antoine.[17] Once he moved to Saint-Louis, Charpentier virtually ceased writing oratorios and instead primarily wrote musical settings of psalms and other liturgical texts such as the Litanies of Loreto. During his years at Saint-Louis, his works tended to be for large ensembles that included paid singers from the Royal Opera. In addition, during these years Charpentier succeeded Étienne Loulié as music teacher to Philippe, Duke of Chartres.[18]

Charpentier was appointed maître de musique for the Sainte-Chapelle in Paris in 1698, a royal post he held until his death in 1704.[19] One of his most famous compositions during his tenure was the Mass Assumpta Est Maria (H. 11). That this work survived suggests that it was written for another entity, an entity that was entitled to call upon the musicians of the Chapel and reward them for their efforts. Indeed, virtually none of Charpentier's compositions from 1690 to 1704 have survived, because when the maître de musique died, the royal administration routinely confiscated everything he had written for the Chapel. Charpentier died at Sainte-Chapelle, Paris, and was buried in the little walled-in cemetery just behind the choir of the chapel (the cemetery no longer exists).

In 1727, Charpentier's heirs sold his autograph manuscripts (28 folio volumes) to the Royal Library, today the Bibliothèque nationale de France. Commonly known as the Mélanges, or Meslanges, and now available as facsimiles published by Minkoff-France, these manuscripts were divided by Charpentier himself into two series of notebooks – one bearing Arabic numbers and the other Roman numbers, and each notebook numbered chronologically. These manuscripts (and their watermarks) have permitted scholars not only to date his compositions but also to determine the events for which many of these works were written.[20]

His compositions include oratorios, masses, operas, and numerous smaller pieces that are difficult to categorize. Many of his smaller works for one or two voices and instruments resemble the Italian cantata of the time, and share most features except for the name: Charpentier calls them air sérieux or air à boire if they are in French, but cantata if they are in Italian.

Not only did Charpentier compose during that “transitory period” so important to the “evolution of musical language, where the modality of the ancients and the emerging tonal harmony coexisted and mutually enriched one another” (Catherine Cessac, Marc-Antoine Charpentier, 2004 edition, p. 464), but he also was a respected theoretician. In the early 1680s he was analyzing the harmony in a polychoral mass by the Roman composer Francesco Beretta (Bibliothèque nationale de France, Ms. Réserve VM1 260, fol. 55–56). About 1691 he wrote a manual to be used for the musical training of Philippe d’Orléans, duke of Chartres; and about 1693 he expanded this manual. The two versions survive as copies in the hand of Étienne Loulié, Charpentier’s colleague, who called them Règles de Composition par Monsieur Charpentier and Augmentations tirées de l’original de Mr le duc de Chartres (Bibliothèque nationale de France, ms. n.a. fr. 6355, fols. 1–16). On a blank page of the Augmentations, Loulié in addition listed some of the points that Charpentier made in a treatise that Loulié called Règles de l’accompagnement de Mr Charpentier. Three theoretical works long known to scholars exist, but did not reveal much about Charpentier's evolution as a theoretician. Then, in November 2009, a fourth treatise, this time in Charpentier’s own hand, was identified in the collection of the Lilly Library at Indiana University, Bloomington, U.S.A. Written during the final months of 1698 and numbered “XLI,” this treatise appears to have been the forty-first in a series hitherto not imagined by Charpentier scholars, a series of theoretical treatises that spans almost two decades, from the early 1680s to 1698.[21]

The prelude to his Te Deum, H. 146, a rondo, is the signature tune for the European Broadcasting Union, heard in the opening credits of Eurovision events. This theme was also the intro to The Olympiad films of Bud Greenspan.

Charpentier's compositions were catalogued by Hugh Wiley Hitchcock in his Les œuvres de Marc-Antoine Charpentier: Catalogue Raisonné, (Paris: Picard, 1982); references to works are often accompanied by their H (for Hitchcock) number. The following lists show selected pieces, not his entire production in each genre.

This article uses material from the article Marc-Antoine Charpentier from the free encyclopedia Wikipedia and it is licensed under the GNU Free Documentation License.

Giovanni Sgambati "Mélodie de Gluck"
Update Required To play the media you will need to either update your browser to a recent version or update your Flash plugin.