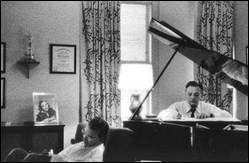 Frederick Loewe (/ˈloʊ/,[1] originally German Friedrich (Fritz)[2] Löwe [ˈløːvə]; June 10, 1901 – February 14, 1988[3]), was an Austrian-American composer. He collaborated with lyricist Alan Jay Lerner on a series of Broadway musicals, including My Fair Lady and Camelot, both of which were made into films.

Loewe was born in Berlin, Germany, to Viennese parents Edmond and Rosa Loewe. His father was a noted Jewish operetta star who performed throughout Europe and in North and South America; he starred as Count Danilo in the 1906 Berlin production of The Merry Widow.[4]

Frederick Loewe grew up in Berlin and attended a Prussian cadet school from the age of five until he was thirteen. At an early age Loewe learned to play piano by ear and helped his father rehearse, and he began composing songs at age seven. He eventually attended a music conservatory in Berlin, one year behind virtuoso Claudio Arrau, and studied with Ferruccio Busoni and Eugene d'Albert. He won the coveted Hollander Medal awarded by the school and gave performances as a concert pianist while still in Germany. At 13, he was the youngest piano soloist ever to appear with the Berlin Philharmonic.[5]

In 1924, his father received an offer to appear in New York City, and Loewe traveled there with him, determined to write for Broadway. This proved to be difficult, and he took other odd jobs, including cattle punching, gold mining and prize fighting.[5] He eventually found work playing piano in German clubs in Yorkville and in movie theaters as the accompanist for silent films.

Loewe began to visit the Lambs Club, a hangout for theater performers, producers, managers, and directors. He credited The Lambs for keeping him working until his career expanded, and left a share of his royalties of Brigadoon to The Lambs Foundation [6] There, he met Alan Jay Lerner in 1942. Their first collaboration was a musical adaptation of Barry Connor's farce The Patsy, called Life of the Party, after a Detroit stock company. It enjoyed a nine-week run and encouraged the duo to join forces with Arthur Pierson for What's Up?, which opened on Broadway in 1943. It ran for 63 performances and was followed two years later by The Day Before Spring.

Their first hit was Brigadoon (1947), a romantic fantasy set in a mystical Scottish village, directed by Robert Lewis. It was followed in 1951 by the less successful Gold Rush story Paint Your Wagon.

In 1956, Lerner and Loewe's My Fair Lady first appeared. Their adaptation of George Bernard Shaw's Pygmalion, with the leads, Henry Higgins and Eliza Doolittle, being played originally by Rex Harrison and Julie Andrews, was a huge hit in New York City and London. The partnership won the Tony Award for Best Musical. MGM took notice and commissioned them to write the film musical Gigi (1958), which won nine Academy Awards, including Best Picture.

Their next Broadway production was Camelot. The production starred Richard Burton, Julie Andrews and Robert Goulet.The trio appeared on The Ed Sullivan Show and sang a few numbers from the musical, along with an appearance by Lerner and Loewe. The following morning the box office was swamped with requests, and Camelot became another hit.

Loewe then decided to retire to Palm Springs, California, not writing anything until he was approached by Lerner to augment the Gigi film score with additional tunes for a 1973 stage adaptation, which won him his second Tony, this time for Best Original Score. The following year they collaborated on a musical film version of The Little Prince, based on the classic children's tale by Antoine de Saint-Exupéry. This film was a critical and box office failure, but the soundtrack recording and the film itself are back in print on CD and DVD.

Loewe was inducted into the Songwriters Hall of Fame in 1972. He remained in Palm Springs, California until his death. [7] The cause of death was cardiac arrest, according to John F. Morris, an artist and longtime friend of Mr. Loewe. He was 86.[8] He had a Golden Palm Star on the Palm Springs Walk of Stars dedicated to him in 1995.[9] He was buried in the Desert Memorial Park in Cathedral City, California.[3][10]

This article uses material from the article Frederick Loewe from the free encyclopedia Wikipedia and it is licensed under the GNU Free Documentation License.