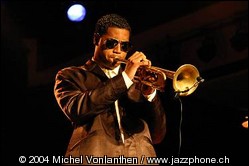 Scott was born on March 31, 1983, in New Orleans, Louisiana,[2] to Cara Harrison and Clinton Scott III and also has a twin brother, Kiel. At the age of 13 he was given the chance to play with his uncle, jazz alto saxophonist Donald Harrison.[3] By 14, he was accepted into the New Orleans Center for Creative Arts (NOCCA), where he studied jazz under the guidance of program directors Clyde Kerr, Jr. and Kent Jordan.[3]

On graduating from NOCCA, Scott received a scholarship to attend Berklee College of Music in Boston, Massachusetts, where he graduated in 2004. Between 2003 and 2004, while attending Berklee,[3][4] he was member of the Berklee Monterey Quartet, and recorded as part of the Art:21 student cooperative quintet,[5] and studied under the direction of Charlie Lewis, Dave Santoro, and Gary Burton. He majored in professional music with a concentration in film scoring.[5]

Since 2002, Scott has released 12 studio albums, and two live recordings.

Discography as a leader

Members of the Christian Scott Ensemble

This article uses material from the article Christian Scott from the free encyclopedia Wikipedia and it is licensed under the GNU Free Documentation License.