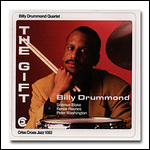 Drummond learned jazz from an early age from his father, who was a drummer and a jazz enthusiast and whose record collection included many recordings of Miles Davis, Art Blakey, Max Roach, Buddy Rich and Elvin Jones, among others. He played in bands from age eight and studied at Shenandoah College And Conservatory Of Music. He moved to New York at the behest of Al Foster in 1986 and shortly thereafter joined the Blue Note band, Out of the Blue (OTB) with whom he recorded their last CD. He subsequently joined the Horace Silver sextet, with whom he toured extensively. He is currently a long-time member of Carla Bley's Lost Chords Quartet. He has played and recorded with Nat Adderley, Ralph Moore (1989 and subsequently), Buster Williams (199093), Charles Tolliver (1991), Lew Tabackin and Toshiko Akiyoshi, Hank Jones (1991), James Moody (early 1990s), Sonny Rollins (199495), Andy LaVerne (1994), Lee Konitz (1995), Dave Stryker (1996), George Colligan (1997), Ted Rosenthal, Bruce Barth, Andrew Hill (from 1997-2000), Larry Willis (2006 to the present), Toots Thielmans, and Freddie Hubbard (mid-1990s). Influences include Tony Williams, Max Roach, Philly Joe Jones, Al Foster, Jack DeJohnette, and Billy Hart, among others. He also leads a New York-based band called Freedom of Ideas. In addition to touring he is currently Professor of Jazz Drums at the Juilliard School of Music and NYU in New York.

As band member with OTB

As band member with Steve Kuhn

This article uses material from the article Billy Drummond from the free encyclopedia Wikipedia and it is licensed under the GNU Free Documentation License.