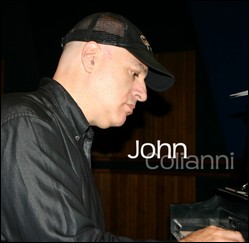 John grew up in the Washington, D.C. metro area and first heard Jazz on swing-era LP re-issues (Ellington, Goodman, Jimmie Lunceford, Count Basie, Armstrong, etc.) in his parents' home. A performance by Teddy Wilson in Washington attended by John when he was about 12 years old also left a strong impression, as did a Duke Ellington performance.

In 2006, looking for an outlet for his high velocity piano improvisations, John formed the John Colianni Quintet. In July 2007, the group recorded its first CD, "Johnny Chops" (Patuxent Records), which was released in May 2008.

Les Paul offered the piano spot in his group to John in August 2003. Les had not used a pianist in his combo since the 1950s and, in looking for suitable candidates, sought the advice of guitarist Bucky Pizzarelli, who recommended John. In Les Paul's recent autobiography, "Les Paul: In His Own Words," Les writes an appreciative description of John's playing style and musical contributions to the re-vamped Les Paul Quartet. John is also seen and heard on the PBS documentary, "Les Paul: Chasing Sound."

Showing keyboard aptitude, a suitable teacher for John was sought by his parents. Local musicians recommended Les Karr, who, in addition to teaching, was well known as an outstanding pianist. Weekly lessons began in the eighth grade, when John was 14. Les Karr himself studied under Teddy Wilson at Juilliard in New York. Les was also the first cousin of pianist Dick Hyman. For John's lessons, Les emphasized technique and introduced studies of the Mathe' System, a method that advances digital dexterity and maximizes the capacity for speedy, high-velocity piano playing. John, noted for fleet "chops," often cites the important role these exercises play.

Still in high school, John began playing piano professionally on the Washington, D.C. jazz scene, which, during that period, included a number of colorful jazz clubs such as The Pigfoot, Mr. Y's Gold Room, One Step Down, Blues Alley, The Bayou, The Famous Ballroom (Baltimore), Frankie Condon's (Rockville), and other establishments.

These were John's first performance venues, and he played among veteran D.C. musicians including Ella Fitzgerald's bassist, Keter Betts, who recruited 16-year-old John for the revue "Jazz Stars of the Future." Jazz Studies Director George Ross recruited John, still in tenth grade, to play regularly with the University of Maryland Jazz Ensemble.

An event years earlier set the stage for John's interest in music. Duke Ellington, the most celebrated musician from Washington D.C. passed through town with his orchestra. A very young John was mesmerized and afterward presented Duke with the Ellington autobiography "Music Is My Mistress," which Duke signed with a personalized message. (Ellington is high on the list of pianists who have influenced John. Others include Oscar Peterson, Art Tatum, Erroll Garner, George Shearing, Count Basie and Teddy Wilson.)

The Coliannis relocated to the Jersey Shore during John's senior year in high school. It was there that John caught the attention of Carlton Drinkard, former accompanist to the one and only "Lady Day" Billie Holiday. Drinkard (aka "Piano Man" in the critically acclaimed film "Lady Sings The Blues") assembled John's trio, and coached him in creating new arrangements and performing before live audiences.

Soon afterward, when he was 19, John visited Lionel Hampton backstage at an Atlantic City casino. He landed a spot in Hampton's orchestra and traveled and recorded for three years with Hampton and band members that included tenor sax great Arnett Cobb, saxists Paul Jeffrey and Tom Chapin, drummers Frankie Dunlop, Oliver Jackson and Duffy Jackson, bassists George Duvivier and Arvell Shaw, and others. To read Hampton's personal account of his association with John, visit the Reviews/News page at www.johncolianni.com

Not too long after the Hampton gig, John entered and won a cash prize in the first annual Thelonius Monk Piano Competition in 1987.

In the 1980s, John played a variety of gigs, including a stint with the New Orleans-inspired band of movie director/clarinetist Woody Allen. Allen's band played steadily at Michael's Pub in New York, and it was there that John came to the attention of Mel Tormé', who was appearing at the same club. Hearing one of John's recordings through the venue's sound system, Torme' promptly hired John as his pianist without an audition. John worked for Torme' from early 1991 to mid 1995, touring and recording six albums.

Currently, John is featured weekly at the Iridium with the Les Paul Trio, appearing Monday nights carrying on Les Pauls long-time gig. Each week, guest guitarists such as Stanley Jordan, Mike Stern, Jose Feliciano, and Larry Coryell appear in tribute to Les with the Trio. John also appears with his own group, The John Colianni Quintet, around New York (at clubs like Smalls and the Knickerbocker, and regularly at The Garage Restaurants Sunday Jazz Brunch), and on the road. Solo piano gigs and guest appearances are also regular events.

John's newest CD, "Johnny Chops," produced and distributed by Patuxent Records (Rockville, Md.), is JC's first release recorded with the recently formed John Colianni Quintet. Other new recordings include: a duo album with guitar virtuoso, Larry Coryell (on Patuxent Records), due for release in the Fall of 2010; John is also both pianist and arranger on the new Jazz album from pop star Steve Miller, also due for a 2010 release.

This article uses material from the article John Colianni from the free encyclopedia Wikipedia and it is licensed under the GNU Free Documentation License.