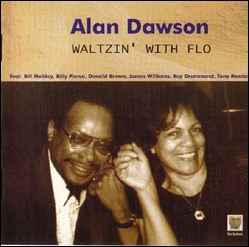 He was born in Marietta, Pennsylvania and raised in Roxbury, Massachusetts. Serving in the Army for Korean War duty, Dawson played with the Army Dance Band while stationed at Fort Dix from 1951–1953. During his tenure, Alan explored the post-bop era by performing with pianist Sabby Lewis. After being released from the Army, Alan toured Europe with Lionel Hampton.

Dawson is best remembered as an early teacher of Tony Williams, and Sawyer Brown drummer, Joseph Smyth. Other former students include: Terri Lyne Carrington, Julian Vaughn, Vinnie Colaiuta, Steve Smith, Kenwood Dennard, Gerry Hemingway, Jeff Sipe, Billy Kilson, and many others. He began teaching at Berklee College of Music in 1957. Dawson suffered a ruptured disc in 1975 which led to him halting his touring schedule, to leave Berklee and limit his teaching to his home in Lexington, Massachusetts.

His teaching style emphasized the music as a whole rather than concentrate on percussion alone. He stressed the importance of learning the melody and structure of the tune to better fulfill the role of accompaniment. For this purpose, he had students play over standards while also singing the melody out loud. He constantly strived for balance between musical ideas and strict technique. He was big on rudiments and wrote extensive exercises intended to be practiced with brushes. He believed using brushes with his "Rudimental Ritual" would reduce stick rebound allowing the sense of "picking up" the sticks. While teaching, Alan also maintained a prolific performing and recording career.

Dawson was the house drummer for Lennie's on the Turnpike in Peabody, Massachusetts from 1963 through to 1970. This gig allowed him to perform with a diverse group of jazz artists. Around this time, Dawson was Boston's premier jazz drummer for local acts as well as bigger name touring artists.

This article uses material from the article Alan Dawson from the free encyclopedia Wikipedia and it is licensed under the GNU Free Documentation License.