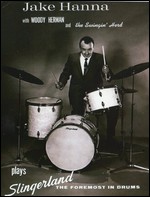 Hanna first performed in his home town of Boston, and was the house drummer at Storyville for a number of years in the 1950s and 1960s. He played with Toshiko Akiyoshi (1957), Maynard Ferguson (1958), Marian McPartland (195961), and Woody Herman's Orchestra (196264). He appears with the Mort Lindsey Orchestra on Judy Garlands multi Grammy award winning live album, Judy at Carnegie Hall (1961). He did extensive work as a studio musician both in and out of jazz, including a period as the drummer for the big band of the Merv Griffin Show (196475). He recorded several albums with Carl Fontana for Concord Jazz in the mid-1970s, and also played in Supersax. Later in his career he did much work as a sideman for Concord. Hanna died on February 12, 2010 in Los Angeles, California of complications from blood disease.[2]

This article uses material from the article Jake Hanna from the free encyclopedia Wikipedia and it is licensed under the GNU Free Documentation License.