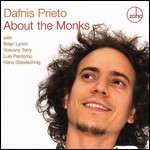 In his home town of Santa Clara, Cuba, he studied percussion and guitar. During his teens, he moved to Havana to study at the National School of Music. He concentrated on classical music and Afro Cuban music before paying more attention to jazz. In 1999, when he was twenty-five, he moved to New York City, where he worked with Eddie Palmieri, Carlos Barbosa-Lima, Arturo O'Farrill, Dave Samuels, and Michel Camilo. During the 2000s, he started a quartet, with members including Brian Lynch, Luis Perdomo, Peter Apfelbaum, and Hans Glawischnig. He wrote, produced, and arranged his debut album, About the Monks (Zoho Music, 2005).[1]

Prieto has conducted master classes, clinics, and workshops. Since 2005, he has been a member of the music faculty at New York University. He teaches at the Frost School of Music at the University of Miami in Miami, Florida.

This article uses material from the article Dafnis Prieto from the free encyclopedia Wikipedia and it is licensed under the GNU Free Documentation License.

Vincenzo Bianciardi Sinfonia a più strumenti
Update Required To play the media you will need to either update your browser to a recent version or update your Flash plugin.