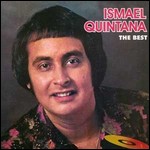 Ismael Quintana (born June 3, 1937) is a singer and composer of salsa music.

Quintana was born in Ponce, Puerto Rico. His family moved to The Bronx sector of New York when he was only two weeks old; there he went to school and while he was still in high school he formed a band with his neighborhood friends.

In 1961, bandleader Eddie Palmieri heard Quintana sing for an audition and invited him to join his newly organized conjunto (small band) "La Perfecta". Quintana accepted and became the lead singer of the band between 1961 and 1971. During this time he co-wrote some of Palmieri's major hit songs. With Palmieri, Quintana was awarded the 1966 Trophy for the "Most Popular Latin Singer of the Year", awarded at the famed Palladium Ballroom in New York.[1]

Quintana left Palmieri for a solo career and signed with Vaya Records (subsidiary of Fania Records) . Between 1974 and 1983, he recorded five albums as a solo artist, scoring his first major hit with "Mi Debilidad" (My Weakness).[2]

Among Quintana's recordings are the following:

With Cal Tjader and Eddie Palmieri

With The Fania All-Stars

In addition to solos Quintana also participated with the Fania All-Stars and went on tour with them to Africa, Japan, France, Central and South America and the United States. In 1976, he made an appearance in the movie "Salsa", with Celia Cruz and the Fania All-Stars. During the 1980s he recorded "Vamos, Háblame Ahora" (Come on, Talk to Me Now) with Papo Lucca.[2]

This article uses material from the article Ismael Quintana from the free encyclopedia Wikipedia and it is licensed under the GNU Free Documentation License.