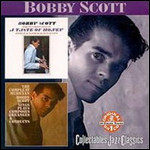 He was born Robert William Scott in Mount Pleasant, New York, and became a pianist, vibraphonist, and singer, and could also play the accordion, cello, clarinet, and double bass. He studied under Edvard Moritz at the La Follette School of Music at the age of eight, and was working professionally at 11.[2] In 1952 he began touring with Louis Prima, and also performed with Gene Krupa and Tony Scott in the 1950s. In 1956 he hit the U.S. Billboard Hot 100 with the song "Chain Gang", peaking at #13.[3] (This was not the same song as Sam Cooke's "Chain Gang".) It sold over one million copies, and was awarded a gold disc.[4]

As a bandleader, he did sessions for Verve, ABC-Paramount, Bethlehem, and Musicmasters. As a songwriter, he won a Grammy Award for Best Instrumental Composition for the song "A Taste of Honey".[5] In addition to "A Taste of Honey", Scott also co-wrote the song "He Ain't Heavy, He's My Brother".[1] In the 1960s he became a music teacher and studied again under Moritz, but occasionally recorded as well, including a Nat King Cole tribute album released in the 1980s. He also arranged for jazz and easy listening musicians such as Les and Larry Elgart.

This article uses material from the article Bobby Scott (musician) from the free encyclopedia Wikipedia and it is licensed under the GNU Free Documentation License.