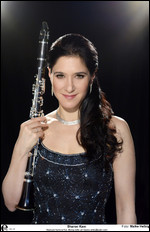 Sharon Kam (born 11 August 1971 in Israel) is a classical clarinetist. Notably, she won the ARD International Music Competition in 1992.[1] In 1991 she was also nominated for the Davidoff Prize.

Sharon Kam is one of the leading clarinet soloists in the world. She is a graduate of the Juilliard School of Music, where she studied with Charles Neidich.[2] She made her orchestral debut at the age of 16 with Israel Philharmonic and conductor Zubin Mehta, later performed with such orchestras as the Chicago Symphony Orchestra, Berlin Philharmonic, London Symphony Orchestra, and Leipzig Gewandhaus Orchestra.[1] In 1998 she was awarded the German ECHO Klassik "Instrumentalist of the Year" award for her recording of Carl Maria von Weber's clarinet concertos and again in 2006, for her CD with the Leipzig Radio Orchestra featuring works by Spohr, Weber, Rossini and Mendelssohn.

This article uses material from the article Sharon Kam from the free encyclopedia Wikipedia and it is licensed under the GNU Free Documentation License.