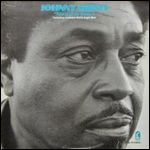 Shines was born in the community of Frayser, in Memphis, Tennessee.[1] He was taught to play the guitar by his mother and spent most of his childhood in Memphis, playing slide guitar at an early age in juke joints and on the street.[1] He moved to Hughes, Arkansas, in 1932 and worked on farms for three years, putting aside his music career.[2] A chance meeting with Robert Johnson, his greatest influence, gave him the inspiration to return to music.[1] In 1935, Shines began traveling with Johnson, touring in the United States and Canada.[1] They parted in 1937, one year before Johnson's death.[2]

Shines played throughout the southern United States until 1941, when he settled in Chicago.[3] There he found work in the construction industry but continued to play in local bars.[1]

He made his first recording in 1946 for Columbia Records, but the takes were never released.[3] He recorded for Chess Records in 1950, but again no records were released.[3] He kept playing with blues musicians in the Chicago area for several more years. In 1952, Shines recorded what is considered his best work, for J.O.B. Records.[1] The recordings were a commercial failure, and Shines, frustrated with the music industry, sold his equipment and returned to working in construction.[1]

In 1966, Vanguard Records found Shines taking photographs in a Chicago blues club, and he recorded tracks for the third volume of Chicago/The Blues/Today![1] The album became a blues classic, and it brought Shines into the mainstream music scene.[1]

Shines toured with the Chicago All Stars alongside Lee Jackson, Big Walter Horton and Willie Dixon.[1]

Shines moved to Holt, Alabama, in Tuscaloosa County, in 1969. Natalie Mattson, a student at the University of Alabama, learned that he was living in the area and invited him to play at a campus coffee house, the Down Under, which she ran. Shines played there on several occasions and brought his friend, blues artist Mississippi Fred McDowell, to perform with him. These were some of his earliest appearances in Alabama after his move there. He continued to play the international blues circuit while living in Holt.[4]

"Born in 1915, Shines is the most vigorous surviving practitioner of acoustic Delta blues. With his intense vibrato, his observant, imaginative, yet tradition-soaked lyrics, and his incomparable slide guitar, he ought to be recorded once a year by the Library of Congress."

In the late 1960s and 1970s, Shines toured with Robert Lockwood, Jr., Robert Johnson's stepson, one of the last living original Delta blues musicians.[3] In 1980, Shines's career was brought to a standstill when he suffered a stroke.[3] He later appeared and played in the 1991 documentary The Search for Robert Johnson. His final album, Back to the Country, with accompaniment by Snooky Prior and Johnny Nicholas, won a W. C. Handy Award.[1][3]

In 1989, Shines met Kent DuChaine, and the two of them toured for the next several years, until Shines's death.[6]

According to the music journalist Tony Russell,

Shines was that rare being, a blues artist who overcame age and rustiness to make music that stood up beside the work of his youth. When Shines came back to the blues in 1965 he was 50, yet his voice had the leonine power of a dozen years before, when he made records his reputation was based on.[3]

This article uses material from the article Johnny Shines from the free encyclopedia Wikipedia and it is licensed under the GNU Free Documentation License.