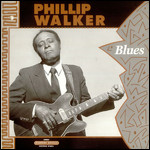 Phillip Walker (February 11, 1937 – July 22, 2010)[2] was an American electric blues guitarist,[1] most noted for his 1959 hit single, "Hello My Darling", produced by J. R. Fulbright. Although Walker continued playing throughout his life, he recorded more sparsely.

Walker grew up in Texas and learned to play guitar in his teens in Houston. He worked with Lonesome Sundown and Lonnie Brooks, and briefly joined Clifton Chenier's band in the 1950s.[3] By the 1960s he was in a R&B band in Los Angeles with his wife Ina, who used the stage name Bea Bopp.[3] His album Bottom of the Top was released by Playboy in 1973. Further albums were released on Black Top, Hightone, JSP, Joliet, and Rounder Records.[3]

Walker was also known for his variety of styles and the changes he would often make for each album. Not until 1969 did he begin to record more regularly when he joined with producer Bruce Bromberg. Since then, fans had a more steady supply of Walker's music.

He appeared on show 237 of the WoodSongs Old-Time Radio Hour in 2002 when Live at Biscuits & Blues had just been released.

On July 22, 2010, Delta Groove Productions issued an email statement regarding Walker's death: "It is with deepest sorrow that we report on the sudden and unexpected passing of legendary blues guitarist Phillip Walker. He died of apparent heart failure at 4:30 AM, early Thursday morning, July 22, 2010. He was 73 years old." [4]

This article uses material from the article Phillip Walker from the free encyclopedia Wikipedia and it is licensed under the GNU Free Documentation License.