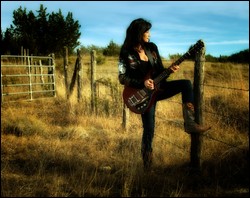 Rosie Flores (born September 10, 1950 in San Antonio, Texas) is a rockabilly and country music artist. Her music blends rockabilly, honky tonk, jazz, and Western swing along with traditional influences from her Tex-Mex heritage. She currently resides in Austin, Texas, where August 31 was declared Rosie Flores Day by the Austin City Council in 2006.[1]

In 1995, she joined Wanda Jackson on a coast-to-coast North American tour.[2]

She has appeared on Austin City Limits and Late Night with Conan O'Brien.

This article uses material from the article Rosie Flores from the free encyclopedia Wikipedia and it is licensed under the GNU Free Documentation License.