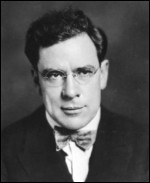 Anderson was born in Atlantic, Pennsylvania, the second of eight children to William Lincoln "Link" Anderson, a Baptist minister, and Charlotte Perrimela ('Premely') Stephenson, both of Scots and Irish descent.[1] His family initially lived on his maternal grandmother Sheperd's farm in Atlantic, then moved to Andover, Ohio, where his father became a railroad fireman while studying to become a minister. They moved often, to follow their father's ministerial posts, and Maxwell was frequently sick, missing a great deal of school. He used his time sick in bed to read voraciously, and both his parents and Aunt Emma were storytellers, which contributed to Anderson's love of literature.

During a visit to his grandmother's house in Atlantic, at age 11, he met the first love of his life, Hallie Loomis, a slightly older girl from a wealthier family. His autobiographical tale, Morning, Winter and Night told of rape, incest and sadomasochism on the farm.[2] It was published under a pseudonym, John Nairne Michealson, to prevent offending family. The Andersons bounced between Andover, Ohio, Richmond Center, Ohio, Townville, Pa., Edinboro, Pa., McKeesport, Pa., New Brighton, Pa., Harrisburg, Pa., to Jamestown, North Dakota in 1907, where Anderson attended Jamestown High School, graduating in 1908.

As an undergraduate, he waited tables and worked at the night copy desk of the Grand Forks Herald, and was active in the school's literary and dramatic societies. He obtained a BA in English Literature from the University of North Dakota in 1911. He became the principal of a high school in Minnewaukan, North Dakota, also teaching English there, but was fired in 1913 for making pacifist statements to his students. He then entered Stanford University, obtaining an M.A. in English Literature in 1914. He became a high school English teacher in San Francisco: after three years he became chairman of the English department at Whittier College in 1917. He was fired after a year for public statements supporting Arthur Camp, a jailed student seeking status as a conscientious objector.

Anderson moved to Palo Alto to write for the San Francisco Evening Bulletin, but was fired for writing an editorial stating that it would be impossible for Germany to pay off its war debt. So he moved to San Francisco to write for the San Francisco Chronicle, but was fired after contracting the Spanish Flu and missing work. Alvin Johnson hired Anderson to move to New York City and write about politics for The New Republic in 1918, but he was fired after an argument with Editor-in-Chief Herbert David Croly.

Anderson found work at The New York Globe, and the New York World. In 1921, he founded The Measure: A Journal of Poetry, a magazine devoted to verse. He wrote his first play, White Desert, in 1923; it ran only twelve performances, but was well-reviewed by the book reviewer for the New York World, Laurence Stallings, who collaborated with him on his next play, What Price Glory?, which was successfully produced in 1924 in New York City. Afterwards he resigned from the World, launching his career as a dramatist.[3]

His plays are in widely varying styles, and Anderson was one of the few modern playwrights to make extensive use of blank verse. Some of these were adapted as movies, and Anderson wrote the screenplays of other authors' plays and novels – Death Takes a Holiday, All Quiet on the Western Front – in addition to books of poetry and essays. His first Broadway hit was the gritty 1924 World War I comedy-drama, What Price Glory, written with Laurence Stallings. The play was notable for its use of profanity, which caused censors to protest. But when the chief censor (Rear Admiral Charles Peshall Plunkett) was found to have written far more obscene letters to General Chamberlaine, he was discredited: soldiers really did speak that way.[4]

The only one of his plays that he himself adapted to the screen was Joan of Lorraine, which became the film Joan of Arc (1948) starring Ingrid Bergman, with a screenplay by Anderson and Andrew Solt. When Bergman and her director changed much of his dialogue to make Joan "a plaster saint" he called her a "big, dumb, goddamn Swede!" Anderson was awarded the Pulitzer Prize in 1933 for his political drama Both Your Houses, and twice received the New York Drama Critics Circle Award, for Winterset, and High Tor.

Anderson enjoyed great commercial success with a series of plays set during the reign of the Tudor family, who ruled England, Wales and Ireland from 1485 until 1603. One play in particular – Anne of the Thousand Days – the story of Henry VIII's marriage to Anne Boleyn – was a hit on the stage in 1948, but did not reach movie screens for 21 years. It opened on Broadway starring Rex Harrison and Joyce Redman, and became a 1969 movie with Richard Burton and Geneviève Bujold. Margaret Furse won an Oscar for the film's costume designs.

Another of his Tudor plays, Elizabeth the Queen opened in 1930 with Lynn Fontanne as Elizabeth and Alfred Lunt as Lord Essex. It was later adapted to the screen as The Private Lives of Elizabeth and Essex (1939), starring Bette Davis and Errol Flynn. Still another of his plays involving Elizabeth I, Mary of Scotland was turned into a 1936 John Ford film, starring Katharine Hepburn as Mary, Queen of Scots, Fredric March as the Earl of Bothwell, and Florence Eldridge as Elizabeth. The play had been a hit on Broadway starring Helen Hayes in the title role.

His play The Wingless Victory was written in verse and premiered in 1936 with famous Broadway actress Katharine Cornell in the lead role. It received mixed reviews.[5]

Two of Anderson's other historical plays, Valley Forge, about George Washington's winter there with the Continental Army, and Barefoot in Athens, concerning the trial of Socrates, were adapted for television. Valley Forge was adapted for television on three occasions – in 1950, 1951 and 1975. Anderson wrote book and lyrics for two successful musicals with composer Kurt Weill. Knickerbocker Holiday, about the early Dutch settlers of New York, featured Walter Huston as Peter Stuyvesant. The show's standout number, "September Song", became a popular standard. So did the title song of Anderson and Weill's Lost in the Stars, a story of South Africa based on the Alan Paton novel Cry, The Beloved Country.

Anderson's long-running 1927 comedy-drama about married life, Saturday's Children, in which Humphrey Bogart made an early appearance, was filmed three times – in 1929 as a part-talkie, in 1935 (in almost unrecognizable form) as a B-film Maybe It's Love and once again in 1940 under its original title, starring John Garfield in one of his few romantic comedies, along with Anne Shirley and Claude Rains. The play was also adapted for television in three condensed versions in 1950, 1952 and 1962.[6]

Anderson married Margaret Haskett, a classmate, on August 1, 1911 in Bottineau, North Dakota. They had three sons, Quentin, Alan, and Terence.

In 1929, Anderson wrote what would prove to be a prophetic play, Gypsy, about a vain, neurotic liar who cheats on her husband then commits suicide by inhaling gas after he catches her.[8] It is around this same time, circa 1930, that Anderson began a relationship with a married woman, Gertrude Higger (married name, Mab Maynard, stage name Mab Anthony). The affair led Anderson to split with Haskett, who died in 1931 following a car accident and stroke.

Mab divorced her husband, singer Charles V. Maynard, and moved in with Anderson. She was a significant help with clerical duties, but had expensive tastes and spent Anderson's money freely. Their daughter, Hesper, was born August 1934. Anderson left Higger[9] following the discovery of her affair with Max's friend, TV producer Jerry Stagg. The combination of losing Anderson, their massive tax debt, and the loss of her home proved too much for Gertrude, who on March 21, 1953, after several unsuccessful attempts, committed suicide by breathing car exhaust. Hesper wrote a book, South Mountain Road: A Daughter's Journey of Discovery describing how following her mother's suicide, she unearthed the fact that her parents never married.

Anderson was an atheist.[11]

Maxwell Anderson died in Stamford, Connecticut, on February 28, 1959, two days after suffering a stroke. He was 70 years old. He was cremated. Half of his ashes were scattered by the sea near his home in Stamford. The other half was buried in Anderson Cemetery near his birthplace in rural northwestern Pennsylvania. The inscription on his tombstone reads:

The largest collection of Maxwell Anderson's papers - over sixty boxes - is housed at the Harry Ransom Center at the University of Texas at Austin and includes published and unpublished manuscript materials for plays, poems, and essays, as well as over 2,000 letters, diaries, financial papers, nearly 1,500 family photographs, and personal memorabilia are preserved along with 160 books from the playwright’s library.[12] The archive was placed at the Ransom Center in 1961 by Anderson's widow, Mrs. Gilda Hazard Anderson. Smaller collections of Anderson's papers can be found at institutions around the world including the Chester Fritz Library, the New York Public Library for the Performing Arts, and the University of North Carolina at Chapel Hill.

This article uses material from the article Maxwell Anderson from the free encyclopedia Wikipedia and it is licensed under the GNU Free Documentation License.

Giovanni Paisiello Mandolinenkonzert Es-Dur
Update Required To play the media you will need to either update your browser to a recent version or update your Flash plugin.