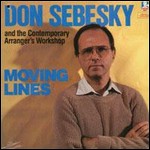 Sebesky trained in trombone at the Manhattan School of Music; in his early career, he played with Kai Winding, Claude Thornhill, Tommy Dorsey, Warren Covington, Maynard Ferguson and Stan Kenton.[1] In 1960 he began devoting himself primarily to arranging and conducting; one of his best-known arrangements was for Wes Montgomery's 1965 album Bumpin'. Other credits include George Benson's The Shape of Things to Come, Paul Desmond's From the Hot Afternoon and Freddie Hubbard's First Light. His song "Memphis Two-Step" was the title track of the Herbie Mann 1971 album of the same name. His 1973 release, Giant Box, hit #16 on the U.S. Billboard Jazz Albums chart.[2]

He has been nominated for thirty-one GRAMMY Awards and won three Grammy Awards in the 1990s: Best Instrumental Arrangement for "Waltz for Debby" (1998) and "Chelsea Bridge" (1999), and Best Instrumental Composition for "Joyful Noise Suite" (1999).[3] He also won the Drama Desk Award for Outstanding Orchestrations for Parade (1999) and Kiss Me, Kate (2000). He won a Tony award for Best Orchestrations in for the revival of Kiss Me, Kate (2000). Sebesky has also written a book, The Contemporary Arranger (1975).

His Broadway theater credits include "Porgy and Bess (London production by Trevor Nunn)", "Sinatra At The Palladium", "Sweet Charity", "Kiss Me Kate", "Bells Are Ringing", "Flower Drum Song", "Parade", "The Life", "Cyrano", "The Goodbye Girl", "Will Rogers Follies", and "Sinatra At Radio City", "Pal Joey", "Come Fly Away", "Baby It's You".

Sebesky's work for television has garnered three Emmy nominations for Allegra's Window on Nickelodeon, The Edge of Night on ABC, and Guiding Light on CBS.

He recently contributed arrangements to the musical Chick Soup: A Musical Recipe for Friendship.

Don Sebesky has been married since 1986 to Janina Serden and has two daughters with her, Olivia and Elizabeth. He has two sons from a previous marriage, Ken and Kevin.

This article uses material from the article Don Sebesky from the free encyclopedia Wikipedia and it is licensed under the GNU Free Documentation License.