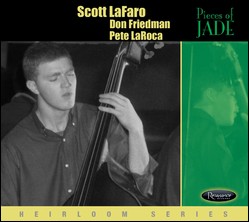 Born in Irvington, New Jersey, LaFaro grew up in a musical family (his father played in many big bands). His family moved to his parents' hometown of Geneva, New York when Scott was five years old. He started on piano while in elementary school, began on the bass clarinet in junior high school, changing to tenor saxophone when he entered high school.[1] He took up the double bass at 18,[2] in the summer before he entered college, because learning a string instrument was required for music education majors. About three months into his studies at Ithaca College in Ithaca, New York, LaFaro decided to concentrate on bass. He often played in groups at the College Spa and Joe's Restaurant[3] on State Street in downtown Ithaca.

LaFaro entered college to study music but left during the early weeks of his sophomore year, when he joined Buddy Morrow and his big band.[4] He left that organization in Los Angeles after a cross-country tour and decided to try his luck in the Los Angeles music scene. There, he quickly found work and became known as one of the best of the young bassists. LaFaro was vigorously disciplined, spending most of his days practicing his instrument. He practiced using a clarinet book to improve his facility. Bassist Red Mitchell also taught LaFaro how to pluck the strings with both the index and middle fingers independently, which also furthered his development. LaFaro spent much of 1958 in pianist/percussionist Victor Feldman's band.

In 1959, after many gigs with such luminaries as Chet Baker, Stan Kenton, Cal Tjader,[5] and Benny Goodman, LaFaro moved back east and joined Bill Evans, who had recently left the Miles Davis Sextet. It was with Evans and drummer Paul Motian that LaFaro developed and expanded the counter-melodic style that would come to characterize his playing. Evans, LaFaro, and Motian committed to the idea of three equal voices in the trio, collectively working together organically towards a singular musical idea, often without the time being explicitly stated. LaFaro's prodigious technique on bass made this concept possible.

By late 1960, LaFaro's playing had matured to a level not previously seen on his instrument. He became in high demand as a bassist. He replaced Charlie Haden as Ornette Coleman's bassist in January, 1961. For a time, Haden and LaFaro had shared an apartment. In the Spring of 1961, LaFaro also played in Stan Getz's band in between gigs with the Bill Evans trio. Around this time he also received a greeting card from Miles Davis suggesting that Davis had interest to recruit him into his band.[6]

In June 1961, the Bill Evans trio settled into the Village Vanguard in New York City for a two-week gig. By now the trio was turning some heads for its groundbreaking style. The last day of the run, June 25, was recorded live in its entirety for eventual release as two albums, Sunday at the Village Vanguard and Waltz for Debby, albums considered among the finest live jazz recordings of all time.[7] The recordings are a good representation of the mastery LaFaro had obtained over his instrument.

LaFaro died in an automobile accident on July 6, 1961 in Flint, New York on U.S. Route 20 between Geneva and Canandaigua,[8] four days after accompanying Stan Getz at the Newport Jazz Festival. His death came just ten days after the Village Vanguard recordings with the Bill Evans Trio.

In 2009, the University of North Texas Press published Jade Visions, a biography of LaFaro by his sister Helene LaFaro-Fernandez. It includes an extensive discography of his recorded work.

In 2009, Resonance Records released Pieces of Jade, the first album released featuring LaFaro as a bandleader. The album includes five selections recorded in New York City during 1961 that showcase LaFaro with pianist Don Friedman and drummer Pete LaRoca, as well as 22 minutes of LaFaro and Bill Evans practicing "My Foolish Heart" in late 1960 during a rehearsal.

Although his performing career lasted only six years, LaFaro's innovative approach to the bass redefined jazz playing, bringing an "emancipation" introducing "so many diverse possibilities as would have been thought impossible for the bass only a short time before",[10] and inspiring a generation of bassists who followed him.

In an interview fellow bassist Charlie Haden recalled their relation:

When I was in L.A., Scotty LaFaro and I roomed together. He would practice for hours: he had all these Sonny Rollins solos he had written out in bass clef! I remained close friends with Scotty in New York, and would go over there to see and admire them, and Scotty and Paul would come over to the Five Spot, too. When Scotty was killed at age 25 (I was 24), I was devastated — I couldn’t play for months. I never knew how Scotty felt about my playing until Paul told me later that the first time Paul heard me it was because Scotty had dragged him out in a snowstorm, “You’ve got to hear this great bass player with Ornette!”[11]

On March 5, 2014, the Geneva City Council approved an idea to declare April 3 (LaFaro's birthday) as "Scott LaFaro Day" in the city every year.[12] On April 4, 2014 a formal ceremony to rename a downtown street as "Scott LaFaro Drive" took place in conjunction with a variety of other events around downtown Geneva (as part of the monthly First Friday celebration "Geneva Night Out") honoring LaFaro's legacy.[13] Organizers plan to hold annual "Scott LaFaro Day" events, including jazz performances and other activities.[14]

LaFaro started his professional career playing a German-made Mittenwald double bass but it was stolen in the Spring of 1958.

Shortly after, he acquired a bass made in 1825 in Concord, New Hampshire by Abraham Prescott. The top of the instrument is a three-piece plate of slab-cut fir; the back is a two-piece plate of moderately flamed maple with an ebony inlay at the center joint; the sides are made of matching maple. It has rolled corners on the bottom and very sloped shoulders on the top, making it easier to get in and out of thumb position. LaFaro continued to play this bass until his death. The bass was badly damaged in the automobile accident that killed him, but was eventually restored and is sporadically used in performance to honor LaFaro.[15]

Bill Evans said of LaFaro's Prescott bass: "It had a marvelous sustaining and resonating quality. He [LaFaro] would be playing in the hotel room and hit a quadruple stop that was a harmonious sound, and then set the bass on its side and it seemed the sound just rang and rang for so long."[16]

With Stan Getz and Cal Tjader

This article uses material from the article Scott LaFaro from the free encyclopedia Wikipedia and it is licensed under the GNU Free Documentation License.