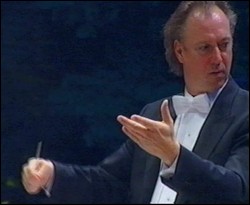 He has performed and recorded internationally for over 25 years. Grodd conducted the gala opening night of the Handel Festival in Halle in Germany of 2003 with "Le Choeur des Musiciens du Louvre" from Grenoble followed by a highly successful season of Händel's rediscovered opera, Imeneo in the Halle Opera House. His appointment to conduct The Auckland Choral Society was confirmed at Holy Trinity Cathedral, Auckland, on 28 September 2008, in a concert that concluded with Anton Bruckner's Locus Iste, Handel's Coronation Anthems and "David Roi".

This article uses material from the article Uwe Grodd from the free encyclopedia Wikipedia and it is licensed under the GNU Free Documentation License.

Jacob Rosenhain Klavierkonzert d-moll op.73
Update Required To play the media you will need to either update your browser to a recent version or update your Flash plugin.