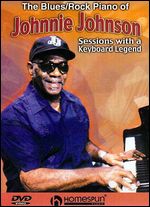 Johnnie Johnson (July 8, 1924 April 13, 2005)[1] was an American pianist and blues musician. His work with Chuck Berry led to his induction into the Rock and Roll Hall of Fame.

He was born Johnnie Clyde Johnson[2] in Fairmont, West Virginia[1] and began playing piano in 1928. He joined the United States Marine Corps during World War II where he was a member of Bobby Troup's all serviceman jazz orchestra, The Barracudas. After his return, he moved to Detroit, Illinois and then Chicago, where he sat in with many notable artists, including Muddy Waters and Little Walter.

He moved to St. Louis, Missouri in 1952 and immediately put together a jazz and blues group, The Sir John Trio with drummer Ebby Hardy and saxophonist, Alvin Bennett. The three scored a regular gig at the Cosmopolitan Club in East St. Louis. On New Year's Eve 1952, Alvin Bennett had a stroke and could not perform. Johnson, searching for a last minute replacement, called a young man named Chuck Berry, the only musician Johnson knew who because of his inexperience, would likely not be playing on New Year's Eve. Although then a limited guitarist, Chuck Berry added vocals and showmanship to the group. As Bennett would not be able to play again because of his stroke, Johnson hired Berry as a permanent member of the trio.

They would remain the Sir John's Trio until Berry took one of their tunes, a reworking of Bob Wills' version of "Ida Red" to Chess Records. The Chess brothers liked the tune and soon the trio were in Chicago recording "Maybellene" and "Wee Wee Hours" a song Johnson had been playing as an instrumental for years for which Berry quickly penned some lyrics. By the time the trio left Chicago, Berry had been signed as a solo act and Johnson and Hardy became part of Berry's band. Said Johnson, "I figured we could get better jobs with Chuck running the band. He had a car and rubber wheels beat rubber heels any day."

Over the next 20 years, the two collaborated in the arrangements of many of Berry's songs including "School Days", "Carol", and "Nadine". The song "Johnny B. Goode" was reportedly a tribute to Johnson, with the title reflecting Johnson's usual behavior when he was drinking. The pianist on the "Johnny B. Goode" session was Lafayette Leake, one of the two main session pianists for Chess (the other being Otis Spann). Leake also played on "Oh Baby Doll", "Rock & Roll Music", "Reelin' and Rockin'", and "Sweet Little Sixteen".

Berry and Johnson played and toured together until 1973. Although never on his payroll after 1973, Johnson played occasionally with Berry until Johnson's death in 2005.

Johnson was known to have a serious drinking problem. In Chuck Berry's autobiography, Berry tells of how he declared there would be no drinking in the car, while on the road. Johnson and bandmates complied with the request by putting their heads out the window. Johnson denied the story but said he did drink on the road. Johnson quit drinking entirely in 1991, after nearly suffering a stroke on stage with Eric Clapton.

In 1998, Johnson told Doug Donnelly of Monroenews.com that "Johnny B. Goode" was a tribute to him. "I played no part in nothing of Johnny B. Goode," Johnson said. "On other songs, Chuck and I worked together, but not that one. We were playing one night, I think it was Chicago, and he played it. Afterward, he told me it was a tribute to me. He did it on his own. I didn't know nothing about it. It was never discussed."

In 1999, Johnson's biography was released, Father of Rock and Roll: The Story of Johnnie B. Goode Johnson by 23-year-old Travis Fitzpatrick. The book was nominated for a Pulitzer Prize by Congressman John Conyers, and garnered Johnson more recognition.

In 2000, Johnson was inducted into the Rhythm and Blues Foundation.

In late 2004, Johnson recorded his final project, Johnnie Be Eighty. And Still Bad! It was recorded in St.Louis, and all the songs were originals (written with the producer, Jeff Alexander); this was a first for Johnson. the project was released the same week he died in April 2005.

In 2005, he played piano on Styx's Big Bang Theory on the re-recording of "Blue Collar Man", entitled "Blue Collar Man @ 2120." It was recorded at the Chess Studios at 2120 S. Michigan Avenue in Chicago, on the 46th anniversary of the recording of "Johnnie B. Goode", at that same studio.[4]

In November 2000, Johnson sued Berry, alleging he deserved co-composer credits (and royalties) for dozens of songs, including "No Particular Place To Go", "Sweet Little Sixteen", and "Roll Over Beethoven", that credit Berry alone. The case was dismissed in less than a year because too many years had passed since the songs in dispute were written.

In 2001, he was inducted into the Rock and Roll Hall of Fame after a campaign by businessman George Turek, author Travis Fitzpatrick and Rolling Stones' guitarist, Keith Richards.

He also has his own star on the St. Louis Walk of Fame.[5] His last band still performs today as The Johnnie Johnson Band.

Johnson was the subject of a Homespun Tapes piano instructional video entitled The Blues/Rock Piano of Johnnie Johnson Sessions with a Keyboard Legend. Originally released in 1999 (DVD version in 2005), the video is hosted by David Bennett Cohen, along with Johnson's band featuring guitarist Jimmy Vivino.

Johnson died in St. Louis, Missouri on April 18, 2005.[1] He was interred in the Jefferson Barracks National Cemetery.

A documentary about Johnson, Johnnie Be Good, by St. Louis newsman and filmmaker, Art Holliday, is currently in production.

The Johnnie Johnson Blues & Jazz Festival is held annually in Fairmont West Virginia, only a few blocks from where Johnson was born.

Wikisource has original text related to this article:
Honoring Piano Legend Johnnie Johnson
To meet Wikipedia's content policies, the external links section for this article may require cleanup.
This article may contain excessive or inappropriate external links. See Wikipedia's external links guidelines for further information. Please improve the article or discuss proposed changes on the talk page.
Please remove this tag after the section has been cleaned.
This page was last modified 18.10.2013 20:18:08

This article uses material from the article Johnnie Johnson (musician) from the free encyclopedia Wikipedia and it is licensed under the GNU Free Documentation License.