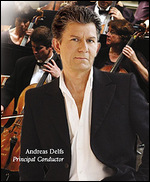 Andreas Delfs (born 30 August 1959) is a German conductor. He is the conductor laureate of the Milwaukee Symphony Orchestra and principal conductor of the Honolulu Symphony.

Delfs was born in Flensburg, West Germany. He began studying piano and music theory at age five, and by age twenty was named Music Director of the Hamburg University Orchestra. [1] Delfs graduated from Hamburg Conservatory in 1981, and earned his master's at Juilliard School of Music in 1984. At Hamburg, Delfs studied under Aldo Ceccato and Christoph von Dohnanyi. After receiving his Master's, he accepted the post of Assistant Conductor of the Pittsburgh Symphony Orchestra, then under the music directorship of Lorin Maazel. From 1984 to 1995 he also held the position of chief conductor of the Swiss Youth Symphony Orchestra (SYSO).

Delfs was appointed Music Director and conductor of the Milwaukee Symphony Orchestra in 1996. In 1999, he led the Orchestra on a tour of Cuba, the first by an American orchestra in more than 37 years. In December 2006, the orchestra announced that Delfs would relinquish the music directorship of the Milwaukee Symphony after the 2008-2009 season (the Orchestra's fiftieth season), and become its Conductor Laureate.[1]

Delfs held the post of Music Director of the St. Paul Chamber Orchestra from 2001 to 2004, and the position of General Music Director of Hannover from 1996 to 2000. In March 2007, Delfs was named Principal Conductor of the Honolulu Symphony,[2] with an initial contract of 3 years.[3] His tenure with the Honolulu Symphony ended when it went bankrupt and filed for liquidation in December 2010.

This article uses material from the article Andreas Delfs from the free encyclopedia Wikipedia and it is licensed under the GNU Free Documentation License.