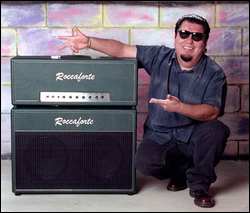 César Rosas (born September 26, 1954 in Hermosillo, Mexico) is a singer, songwriter and guitarist for Los Lobos. Rosas also participates in the Latin supergroup Los Super Seven. Perhaps the most recognizable member of Los Lobos, Rosas is known for his trademark black sunglasses and slicked-back, black hair. His singing voice is reminiscent of Chicago electric blues legend Howlin' Wolf. His guitar playing is influenced by Jimi Hendrix.

Aside from live shows with Los Lobos, Cesar Rosas has been active as a session musician and sideman during the past several decades. In addition, he has released a solo album in 1999 called Soul Disguise and toured after its release.

The Rosas's have three daughters.

Rosas' wife, Sandra Rosas, was reported missing in 1999. Her half brother, Gabriel Gómez, was tried, convicted of her murder, and sentenced to life in prison without the possibility of parole. Sandra Rosas' body was found on November 22, 2000.[1]

This article uses material from the article Cesar Rosas from the free encyclopedia Wikipedia and it is licensed under the GNU Free Documentation License.