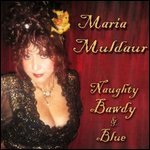 Maria Muldaur (born September 12, 1943) is an American folk and blues singer who was part of the American folk music revival in the early 1960s. She recorded the 1973 hit song "Midnight at the Oasis" and continues to record albums in the folk traditions.[1]

She was the wife of musician Geoff Muldaur and is the mother of singer-songwriter Jenni Muldaur.

Muldaur began her career in the early 1960s as Maria D'Amato, performing with John Sebastian, David Grisman, and Stefan Grossman as a member of the Even Dozen Jug Band. She then joined Jim Kweskin & the Jug Band as a featured vocalist and occasional violinist. During this time, she was part of the Greenwich Village scene that included Bob Dylan, and some of her recollections of the period, particularly with respect to Dylan, appear in Martin Scorsese's 2005 documentary film No Direction Home.

She married fellow Jug Band member Geoff Muldaur, and after the Kweskin group broke up, the two of them produced two albums. She began her solo career when their marriage ended in 1972, but retained her married name.[3]

Her first solo album, Maria Muldaur, released in 1973, contained her hit single "Midnight at the Oasis", which reached number 6 on the Billboard Hot 100 in 1974. It also peaked at number 21 in the UK Singles Chart.[4] Later that year, she released her second album, Waitress in a Donut Shop. This included a re-recording of "I'm a Woman", the Leiber and Stoller number first associated with Peggy Lee and a standout feature from her Jug Band days. The title of this album is taken from a line in another song on the album, "Sweetheart", by Ken Burgan.

Around this time, Muldaur established a relationship with the Grateful Dead. Opening for some Grateful Dead shows in the summer of 1974, with John Kahn, bassist of the Jerry Garcia Band, eventually earned her a seat in that group as a backing vocalist in the late 1970s. Around the same time Muldaur met and eventually collaborated with bluegrass icon Peter Rowan. The two became close, and she was chosen to be the godmother of his daughter Amanda Rowan. She appeared on Super Jam (1989), the live recording of the German TV series Villa Fantastica, with Brian Auger on piano, Pete York on drums, Dick Morrissey on tenor saxophone, Roy Williams on trombone, Harvey Weston on bass and Zoot Money, also on vocals.

Muldaur continued to perform, tour, and record after her success in the mid-1970s, including a turn at the Teatro ZinZanni in 2001.[5][6]

This article uses material from the article Maria Muldaur from the free encyclopedia Wikipedia and it is licensed under the GNU Free Documentation License.

Anton Rubinstein Sérénade russe
Update Required To play the media you will need to either update your browser to a recent version or update your Flash plugin.