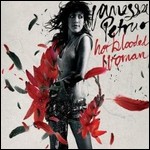 Vanessa Anneliese Petruo (born 23 October 1979), also known as Vany, is a German singersongwriter and actress. She came to international prominence as a member of the allfemale pop band No Angels, that was created during the talents show Popstars.[1] The band enjoyed a great popularity throughout Central Europe, following their recordbreaking debut single "Daylight in Your Eyes" and the album Elle'ments. From 2001 to 2003, No Angels sold more than 5 million units.[2][3] After their disbandment in 2003, Petruo launched her solo career.[4]

After the release of the moderately successful solo song "Drama Queen", Petruo took much more control over her image and music. Following a short hiatus from public performance, she introduced elements of blues, funk and jazz into her solo album debut Mama Lilla Would, which was critically acclaimed but a commercial failure. Her musical ambitions have since mainly focused on her training as a jazz singer and several new compositions, widely published through her own MySpace. In 2007 Petruo refused to rejoin No Angels.[5]

While maintaining a recording career Petruo has also gained fame for both her work as a voice actress and starring in several film and television productions, including RTL series Wilde Engel (2005) and a supporting role in the 2006 film Where Is Fred?.

She was born in 1979 as Vanessa Anneliese Petruo on 23 October 1979 in Berlin. Her mother Mercedes, a SpanishPeruvian, owned a salsa nightclub in Berlin-Charlottenburg, and her father Thomas Petruo is a voice actor.[5] Petruo has two younger siblings, Jon Alexander and Priszilla. Her grandfather, Heinz Petruo, was a famous radio show host for RIAS and a voice actor, and is probably best known as the German dub of Darth Vader in the Star Wars saga.[5] Petruo attended catholic school in Berlin-Moabit, and catholic high school in Berlin-Westend.[6]

Influenced by her father, Petruo herself began dubbing films as a child. Aged twelve, she started taking vocal lessons. In her teenage years she made several appearances on German television, while gaining experience in music with own bands and first professional song recordings. After her high school graduation, Petruo applied herself to her communication studies but quickly chose to leave university and for internships at both MTV Germany and news channel N24. She began her professional music career in 1998, forming a duo STiLL with songwriter Bernd Klanke. They released an extended play, STiLL, independently, as they failed to sign a record contract.[7]

In 2000, Petruo auditioned for German reality television program Popstars. She entered the competition with thousands of other women, and the judges Simone Angel, Rainer Moslener and Mario M. Mendryzcki were impressed with her performance of Bill Withers' hit single "Ain't No Sunshine". She earned a position in the top thirty finalists and travelled to Mallorca, Spain, to join her competitors for a workshop there. In the end Petruo made it to the final ten on the show, and during a special episode in November 2000, jury member Moslener disclosed that Petruo was chosen to become part of the final girl group, later called No Angels, along with Nadja Benaissa, Lucy Diakovka, Sandy Mölling and Jessica Wahls.[8] The five signed a record contract with the Polydor Records.[9]

No Angels released their debut single "Daylight in Your Eyes" on 5 February 2001. The song topped the Austrian, German and Swiss Singles Charts, making it one of the most successful debuts of the year.[10][11][12] The album Elle'ments mirrored the success of "Daylight in Your Eyes", selling one million units and earning triple platinum and septuplicate gold certifications.[13] The second album Now ... Us! followed the success of Elle'ments, and included the single "Something About Us", written by Petruo. Incorporating autobiographical features, it was inspired by Petruo's experiences with the media the year before.[1] "I recalled the past year, the good and the bad times, and I built my own personal résumé", she stated.[14]

In the following years, the band released four more albums, including the #1 charting studio albums Now ... Us! and Pure, a live album and a successful Swing album title When The Angels Swing.

Altogether the albums spawned twelve singles - including four number 1 singles and ten Top 10 hits - making the No Angels the most successful European girl group of their era with more than 5 million singles and albums sold.

On 5 September 2003, the group announced that they would no longer be performing together after three years of continual touring and increasing cases of illness. The release of The Best of No Angels in November of the same year marked the end of the band, whose members each went their separate ways. While some decided to go for motherhood or musical and television careers, Vanessa Petruo planned to take a longer vacation.

No Angels announced a reunion on 31 January 2007 however Vanessa declined to join the other four due to focusing on her solo career.

In spring 2004, however, Petruo was the first ex-member of the No Angels to launch music as a solo artist. From now on performing under her nickname Vany, she released her first self-written solo single, "Drama Queen", which became a moderate success on the airplay charts and eventually peaked at number 11 on the German singles chart. A video for a second single called "Pop That Melody", produced by Mousse T, was filmed but the release of the track was soon cancelled. Instead, Petruo worked as a simple employee for her record company Polydor for a couple of months.

Thereupon Petruo also spent time on synchronizing movies (including Lilo & Stitch and Back to Gaya) and acting, most noticeably as a member of the main cast of Wilde Engel, a TV action series affected by Charlie's Angels whose four episodes were broadcast in April 2005.

In fall 2006, she starred alongside Til Schweiger, and Alexandra Maria Lara in the motion picture Where Is Fred?. Still in 2006 Petruo went also on tour with famous soul singer Solounge.

In August 2007, Peturo announced that she had left Universal Island due to varying viewpoints in music and marketing.

At the 2009 Echo Awards, Vanessa stated that her new album was scheduled for an August 2009 release. But stated in March 2010 that she wanted to wait before releasing an album, avoiding bad media reviews caused by No Angels last year (especially Nadja Benaissa's case). She said that she was wishing the girls all the best but that they did not remain friends.

On 13 March 2010, Petruo posted on her Facebook page and YouTube account a brand new demo from her forthcoming album, "Happy", a fresh song aimed "for those who are in love". She thanked her fans for their patience, stating again that the album would be released very soon.

Some demos from Vanessa's yet to be released album leaked earlier on YouTube.

This article uses material from the article Vanessa Petruo from the free encyclopedia Wikipedia and it is licensed under the GNU Free Documentation License.