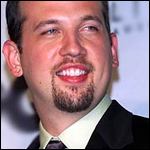 Justin Paul Jeffre (born on February 25, 1973) is an American pop singer and politician.[1] A long-time resident and vocal supporter of Cincinnati, Jeffre is probably best known as a member of the multi-platinum selling boy band 98 Degrees.

Before shooting to super stardom, Jeffre was a student at the School for Creative and Performing Arts in Cincinnati. It was there that he first became friends with Nick Lachey. The two would later team up with Drew Lachey and Jeff Timmons to form 98 Degrees. The group was signed to Motown Records and soon began burning up the charts with hits like Invisible Man, Because of You, Hardest Thing and Una Noche.

98 Degrees eventually took a break, and Jeffre began to pursue his passion for politics. He was a 2005 mayoral candidate for the city of Cincinnati. Though he did not gain election, he did succeed in bringing attention to Cincinnati. Jeffre continues to be an activist on various projects.[2]

After a 13 year hiatus, Jeffre and the other members of 98 Degrees joined forces again, releasing a new album and becoming part of The Package Tour. The Package Tour was with Boyz II Men and New Kids on the Block.

The group plans to continue recording and performing together.

This article uses material from the article Justin Jeffre from the free encyclopedia Wikipedia and it is licensed under the GNU Free Documentation License.