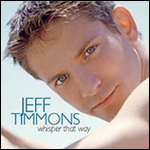 Jeff Timmons was the founding member of 98 Degrees. While studying Psychology at Kent State, Timmons decided to move to Los Angeles to pursue a career in entertainment. Although he received several acting jobs (including a commercial for the U.S. Navy), his passion belonged to music and he formed a singing group. The group formed independently and were later signed to the Motown label in the mid-1990s. After building popularity with their appearance in the movie Mulan, singing "True to Your Heart," a duet with labelmate Stevie Wonder, their success broke out in late 1998 with their album 98 Degrees and Rising, which included the hit singles "The Hardest Thing", "I Do (Cherish You)" and "Because of You". After the first album, 98 Degrees left Motown for its parent company, Universal Records. All four albums released by the group went platinum. The group toured internationally through 2002.

Jeff Timmons and his fellow 98 Degrees members came together to sing on Nick and Jessica's Christmas Special (2004).

Jeff and the other members of 98 Degrees decided to take a break to pursue other avenues, and Jeff launched his solo career by touring with Jim Brickman. After positive reviews, he wrote and arranged his first solo album, Whisper That Way, which was released in August 2004 and included the singles Whisper That Way, Better Days and Favorite Star. Whisper That Way reached #20 on the Adult Contemporary chart.

The album succeeded overseas as well with chart-topping hits in Japan, China and Malaysia.

In September 2005, 98 Degrees performed at Club Purgatory in the Over the Rhine neighborhood of Cincinnati to support bandmate Justin Jeffre in his candidacy for mayor of Cincinnati.

In December 2009, Timmons offered his second album to fans for free via his website. The album contained the single "Emotional High".

Jeff Timmons joined The Chippendales male stripper show at RIO Las Vegas as emcee and singer for a limited run May 12 through June 5, 2011 (Thursday through Sunday nights). The press release stated Timmons would "flex his vocal chords and muscles for four weekends only".

Timmons was born April 30, 1973 in Canton, Ohio. He graduated from Massillon Washington High School in Massillon, Ohio, and attended Malone College in Canton where he played football for a year.[1]

Timmons is now married to second wife Amanda and they have one daughter Ariahuna. Amanda has two children from a previous relationship, Karsten and Ashten.

This article uses material from the article Jeff Timmons from the free encyclopedia Wikipedia and it is licensed under the GNU Free Documentation License.