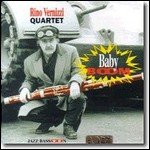 Rino Vernizzi was born in Mezzano Inferiore, Italy. He graduated in bassoon at Parma Conservatory with Enzo Muccetti in 1967, and the later he gave himself up to the improvement of the piano with Paolo Cavazzini showing since early career his interest in jazz music,[1] then abandoned to devote himself to the world of Symphony Orchestras.

Vernizzi has won many competitions,[2] he has played with several of the major Italian orchestras and for many years was the first bassoon of the Orchestra dell'Accademia Nazionale di Santa Cecilia in Rome. As a soloist he collaborated with conductors such as Giuseppe Sinopoli, Carlo Maria Giulini, Kurt Masur, Neville Marriner, Daniel Oren, Daniele Gatti and he toured all over the world.[2]

Vernizzis goal has always been to explore the entire spectrum of music, not just the thread of classic European one, but also engaging, especially in the last decade, in other musical genres, particularly in jazz.[1]

This article uses material from the article Rino Vernizzi from the free encyclopedia Wikipedia and it is licensed under the GNU Free Documentation License.