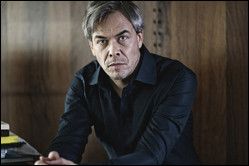 Lintu studied piano and cello at the Turku Conservatory and at the Sibelius Academy. He also studied conducting with Atso Almila, and later with Jorma Panula and Eri Klas. He took part in conducting master classes with Ilya Musin. Lintu won the Nordic Conducting Competition in 1994 in Bergen. He graduated from the Sibelius Academy in 1996 with honours.

From 1998 to 2001, Lintu was chief conductor of the Turku Philharmonic Orchestra. In 2005, he served as the artistic director for the Summer Sounds Festival of the Finnish contemporary music ensemble Avanti!. Lintu was chief conductor of the Tampere Philharmonic Orchestra from 2009 to 2013.[1] In December 2010, the Finnish Radio Symphony Orchestra announced the appointment of Lintu as its eighth chief conductor, effective 1 August 2013, with an initial contract of 3 seasons. He held the title of principal guest conductor with the orchestra for the 2012-2013 season.[2]

Lintu has conducted commercial recordings for such labels as Claves, Dacapo, Danacord, Hyperion, Naxos, and Ondine.

This article uses material from the article Hannu Lintu from the free encyclopedia Wikipedia and it is licensed under the GNU Free Documentation License.