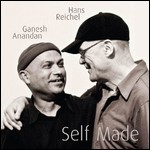 Reichel was born in Hagen, Germany. He began to teach himself violin at age 7, playing in the school orchestra until age 15. Around age 15, he began to play guitar and became interested in rock music, including The Beatles, The Rolling Stones, and later, Frank Zappa, Cream, and Jimi Hendrix. Reichel played in various groups before giving up music for a time while studying graphic design and working as a typesetter.

He came back to music in the early 1970s, when he recorded a tape of guitar music. This recording was sent to the jury of the German Jazz Festival in Frankfurt, where he was asked to appear in a special concert for newcomers. Discussions with Jost Gebers, the founder of Free Music Production (FMP), led to release of Reichel's music on the label, his first release being Wichlinghauser Blues in 1973.

The majority of Reichel's body of work consists of solo recordings, along with performances in smaller group settings. He recorded duets with a wide variety of musicians, including accordionist Rüdiger Carl, cellist Tom Cora, percussionist EROC, and a number of guitarists including Kazuhisa Uchihashi and Fred Frith. Reichel was also a member of the September Band (along with vocalist Shelley Hirsch, Rüdiger Carl, and drummer Paul Lovens), and also performed with larger ensembles led by the likes of saxophonist Thomas Borgmann and Butch Morris, an avante-garde conductor.

Due to the limited distribution of FMP, Reichel's music has never much been heard, especially in the United States. Smaller, independent labels such as Rastascan, Table of the Elements, and Intakt have issued some of his recordings in North America. Despite this limited exposure, Reichel was featured in Bart Hopkin's Gravikords, Whirlies & Pyrophones, a book and CD released in 1996, devoted to experimental musical instruments. He was also named among the "30 Most Radical Guitarists" in a 1997 issue of Guitar Player magazine.

Reichel constructed and built several variations of guitars and basses, most of them featuring multiple fretboards and unique positioning of pickups and 3rd bridges. The resulting sounds exceeded the range of conventional tuning and added unusual effects, from odd overtones to metallic noises, to his play.

His Daxophone is a single wooden blade fixed in a block containing a contact microphone, which is played mostly with a bow.

Hans Reichel designed a few typefaces, among them one of todays most popular type designs in advertising and in marketing (FF Dax).

This article uses material from the article Hans Reichel from the free encyclopedia Wikipedia and it is licensed under the GNU Free Documentation License.

Johann Georg Albrechtsberger Allegro moderato aus dem Harfenkonzert C-Dur
Update Required To play the media you will need to either update your browser to a recent version or update your Flash plugin.