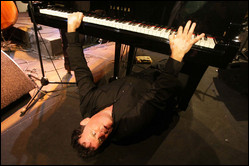 Al Copley (born Alman LeGrande Copley, 1952, Buffalo, New York) is a blues pianist who co-founded the American jump blues band Roomful of Blues[1] with guitarist Duke Robillard in Westerly, Rhode Island in 1967. In 1974 Count Basie called Roomful "the hottest blues band I've ever heard". In 1975 Roomful signed a recording contract with Island Records, thanks to support from Doc Pomus. After 16 years and 7 albums with Roomful, Copley relocated to Europe in 1984, where he still travels and performs extensively.

Strongly influenced by the music of Big Joe Turner, Copley's solo style spans several genres and defies categorisation, including (but certainly not limited to) swing, boogie-woogie and barrelhouse. Live performances are characterised by their energy and Copley's acrobatic approach to piano performance, in the style of Jerry Lee Lewis.

Copley has twice been nominated for a Grammy Award (1983 and 1984) in the category Best Traditional Blues Album. In 1978 he performed with the original Blues Brothers, John Belushi and Dan Aykroyd, and in 1993 he opened for Eric Clapton at the Royal Albert Hall in London for 12 concerts, performing with Jimmie Vaughan. His performances on the main stage at the Montreux Jazz Festival in Montreux, Switzerland include opening for Bob Dylan in 1998, opening for Eric Clapton's Legends in 1997, doing a duo of "Jazz-Hot" with Jeff Healey in 1997, and opening the Blues Summit with Etta James and B. B. King in 1993. Copley also performed at the first Montreux Jazz Festival in Japan with George Duke and McCoy Tyner in 1998. His "Glass Boogie" is one of the most inventive boogie-woogie piano solos ever recorded.

This article uses material from the article Al Copley from the free encyclopedia Wikipedia and it is licensed under the GNU Free Documentation License.

Pjotr Iljitsch Tchaikovsky Variationen aus der Orchestersuite G-Dur "Mozartiana" op. 61
Update Required To play the media you will need to either update your browser to a recent version or update your Flash plugin.