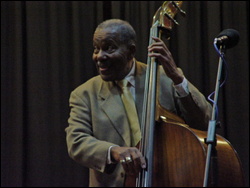 Eugene Joseph Wright (born May 29, 1923), nicknamed The Senator, is an American jazz bassist, best known for his work as a member of The Dave Brubeck Quartet, in particular on the group's most famous album, Time Out (1959), with pianist Brubeck, drummer Joe Morello and alto saxophonist Paul Desmond.

Wright had played with the Lonnie Simmons group, and led his own band, the Dukes of Swing, but his big break came when he was recruited by Dave Brubeck. He had a very solid, Kansas-city style, theoretically at odds with, but in practice an important component of, Brubeck's cool, mannered jazz.

Basically Wright is a book of his compositions for bass published by Hansen.

With the death of his bandleader Dave Brubeck on December 5, 2012, Wright is the only living member of the classic quartet.

This article uses material from the article Eugene Wright from the free encyclopedia Wikipedia and it is licensed under the GNU Free Documentation License.