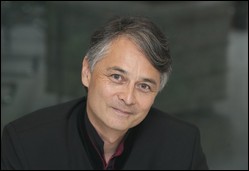 Jun Märkl (born 11 February 1959 in Munich) is a German conductor. He is the son of a German violinist father and a Japanese pianist mother.

Märkl studied piano and the violin as a youth. Beginning in 1978 at the Musikhochschule Hannover he continued his piano and violin studies and also began to study conducting. He later attended the University of Michigan where his mentors included Gustav Meier. He was also a pupil of Sergiu Celibidache. He later won a conducting stipend to Tanglewood, where he was under the tutelage of Leonard Bernstein and Seiji Ozawa.[1]

From 1991 to 1994 Märkl served as Music Director of the Saarländischen Staatstheaters (Saarland State Theatre) in Saarbrücken. From 1994 to 2000, he was Generalmusikdirector and director of opera at the Mannheim National Theatre. In the U.S. he made his Metropolitan Opera conducting debut in February 1999 with Il trovatore,[2] and returned in December 2000 with Turandot.[3]

In 2005, Märkl became music director of the Orchestre National de Lyon (ONL). With the ONL, he has conducted several recordings for the Naxos label, including music of Claude Debussy,[4][5][6] Maurice Ravel,[7] and Olivier Messiaen. Märkl concluded his ONL tenure in 2011. In September 2007, he became principal conductor of the MDR Symphony Orchestra in Leipzig. Märkl resigned from this post after the 2011-2012 season.[8] He became musical advisor to the Basque National Orchestra (Orquesta de Euskadi) effective with the 2014-2015 season.[9] In November 2014, the orchestra elevated Märkl's title to chief conductor with immediate effect, through the 2015-2016 season.[10] He is scheduled to conclude his tenure with the Basque National Orchestra in June 2017.[11]

This article uses material from the article Jun Märkl from the free encyclopedia Wikipedia and it is licensed under the GNU Free Documentation License.