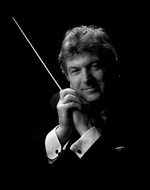 Hughes was born in Cardiff, the son of another successful musician, composer Arwel Hughes. He studied at University College, Cardiff, and the Royal College of Music. He studied conducting under Sir Adrian Boult, Bernard Haitink and Rudolf Kempe.

He became well known after a rousing televised performance of William Walton's Belshazzars Feast, which won the praise of the composer himself. He later hosted a BBC series, The Much-Loved Music Show. From 1980 to 1986, he was Associate Conductor of the BBC Welsh Symphony Orchestra, and from 1994 to 1999 he was Principal Conductor of the Aalborg Symphony Orchestra. He has also made numerous recordings, including works such as Verdi's Requiem and Handel's Messiah. He has championed less well-known composers, including recording a complete cycle of the symphonies of the Danish composer Vagn Holmboe. He is also the Artistic Director of the Welsh Proms, which he founded in 1986, and has been Principal Conductor and Music Director of the National Youth Orchestra of Wales since 2003.

Hughes has previously been the Chairman of Governors at the John Lyon School, in Harrow - one of the country's top independent day schools. A dedicated family man, Hughes has been married to his wife Jean for over 40 years. His son, Geraint is a familiar face to sports fans. He is a former Sports Correspondent for BBC News and currently works for Sky Sports.

This article uses material from the article Owain Arwel Hughes from the free encyclopedia Wikipedia and it is licensed under the GNU Free Documentation License.

Jacques Offenbach "Valse des Rayons" aus dem Ballett "Le Papillon"
Update Required To play the media you will need to either update your browser to a recent version or update your Flash plugin.