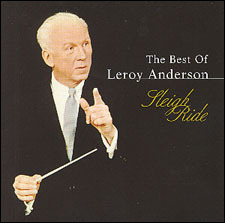 Leroy Anderson (/ləˈrɔɪ/ lə-ROY); June 29, 1908 – May 18, 1975) was an American composer of short, light concert pieces, many of which were introduced by the Boston Pops Orchestra under the direction of Arthur Fiedler. John Williams described him as "one of the great American masters of light orchestral music."[1]

Born in Cambridge, Massachusetts, to Swedish parents, Anderson was given his first piano lessons by his mother, who was a church organist. He continued studying piano at the New England Conservatory of Music. In 1925 Anderson entered Harvard College, where he studied musical harmony with Walter Spalding, counterpoint with Edward Ballantine, canon and fugue with William C. Heilman, orchestration with Edward B. Hill and Walter Piston, composition, also with Piston, and double bass with Gaston Dufresne. He also studied organ with Henry Gideon. He graduated with a Bachelor of Arts, Magna cum laude in 1929 and was elected to Phi Beta Kappa.[2] In Harvard University Graduate School, he studied composition with Walter Piston and George Enescu and received a Master of Arts in Music in 1930.[3]

Anderson continued studying at Harvard, working towards a PhD in German and Scandinavian languages; Anderson spoke English and Swedish during his youth and eventually became fluent in Danish, Norwegian, Icelandic, German, French, Italian, and Portuguese.

At the time he was working as organist and choir director at the East Milton Congregational Church, leading the Harvard University Band, and conducting and arranging for dance bands around Boston. In 1936 his arrangements came to the attention of Arthur Fiedler, who asked to see any original compositions that he could use in his concerts as the 18th conductor of the Boston Pops Orchestra at Symphony Hall.[4] Anderson's first work was the 1938 Jazz Pizzicato, but at just over ninety seconds the piece was too short for a three-minute 78-RPM single of the period.[5] Fiedler suggested writing a companion piece and Anderson wrote Jazz Legato later that same year. The combined recording went on to become one of Anderson's signature compositions.[6]

In 1942 Anderson joined the U.S. Army, and was assigned in Iceland with the U.S. Counter Intelligence Corps as a translator and interpreter;[4] in 1945 he was reassigned to the Pentagon as Chief of the Scandinavian Desk of Military Intelligence. However his duties did not prevent him from composing, and in 1945 he wrote "The Syncopated Clock"[7] and "Promenade." Anderson became a reserve officer and was recalled to active duty for the Korean War. In 1951 Anderson wrote his first hit, "Blue Tango," earning a Golden Disc and the No. 1 spot on the Billboard charts.

His pieces and his recordings during the fifties conducting a studio orchestra were immense commercial successes. "Blue Tango" was the first instrumental recording ever to sell one million copies. His most famous pieces are probably "Sleigh Ride" and "The Syncopated Clock." In February 1951, WCBS-TV in New York City selected "Syncopated Clock" as the theme song for The Late Show, the WCBS late-night movie (using Percy Faith's recording). Mitchell Parish added words to "Syncopated Clock", and later wrote lyrics for other Anderson tunes, including "Sleigh Ride", which was not written as a Christmas piece, but as a work that describes a winter event. Anderson started the work during a heat wave in August 1946. The Boston Pops' recording of it was the first pure orchestral piece to reach No. 1 on the Billboard Pop Music chart.[8] From 1952 to 1961, Anderson's composition "Plink, Plank, Plunk!" was used as the theme for the CBS panel show I've Got A Secret.

Anderson's musical style employs creative instrumental effects and occasionally makes use of sound-generating items such as typewriters and sandpaper. (Krzysztof Penderecki also used a typewriter in his orchestral work "Fluorescences" (1961–62), but with a decidedly less humorous effect.)

Anderson wrote his Piano Concerto in C in 1953 but withdrew it, feeling that it had weak spots. In 1988 the Anderson family decided to publish the work. Erich Kunzel and the Cincinnati Pops Orchestra released the first recording of this work; four other recordings, including one for piano and organ, have since been released.

In 1958, Anderson composed the music for the Broadway show Goldilocks with orchestrations by Philip J. Lang. Even though it earned two Tony awards, Goldilocks did not achieve commercial success. Anderson never wrote another musical, preferring instead to continue writing orchestral miniatures. His pieces, including "The Typewriter," "Bugler's Holiday," and "A Trumpeter's Lullaby" are performed by orchestras and bands ranging from school groups to professional organizations.

Anderson would occasionally appear on the Boston Pops regular concerts on PBS to conduct his own music while Fiedler would sit on the sidelines. For "The Typewriter" Fiedler would don a green eyeshade, roll up his sleeves, and mime working on an old typewriter while the orchestra played.

Anderson was initiated as an honorary member of the Gamma Omega chapter of Phi Mu Alpha Sinfonia at Indiana State University in 1969.

For his contribution to the recording industry, Leroy Anderson has a star on the Hollywood Walk of Fame at 1620 Vine Street. He was posthumously inducted into the Songwriters Hall of Fame in 1988 and his music continues to be a staple of "pops" orchestra repertoire. In 1995 the new headquarters of the Harvard University Band was named the Anderson Band Center in honor of Leroy Anderson.[11] The Leroy Anderson House in Woodbury, Connecticut, has been placed on the National Register of Historic Places.[12]

In 2006, one of his piano works, "Forgotten Dreams", written in 1954, became the background for a British TV advertisement for mobile phone company '3'. Previously, Los Angeles station KABC-TV used the song as its sign-off theme at the end of broadcast days in the 1980s, and Mantovani's recording of the song had been the closing theme for WABC-TV's Eyewitness News for much of the 1970s.

The Typewriter was used as the theme song for Esto no tiene nombre, a Puerto Rican television comedy program – loosely based on the US television series Rowan & Martin's Laugh-In – produced by Tommy Muñiz between the late 1960s and late 1970s. It is also the signature tune for the BBC Radio 4 series, The News Quiz which has been running since 1977.

"Forgotten Dreams" was used as a recurring theme in the French film Populaire (2012).

The following is a selected discography of original recordings by Leroy Anderson. They were released from 1958 to 1962 on 33​1⁄3 rpm discs and on digitally remastered compact discs released posthumously. 78 rpm and 45 rpm discs from 1945–1962 and releases of identical recordings on different labels in U.K., Germany, New Zealand and elsewhere are not listed.[15]

This article uses material from the article Leroy Anderson from the free encyclopedia Wikipedia and it is licensed under the GNU Free Documentation License.