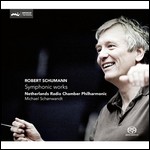 Michael Schønwandt (born 10 September 1953 in Frederiksberg) is a Danish conductor. In Denmark, he studied piano, theory, and composition, and later continued musical studies at the Royal Academy of Music in London.

In 1979, Schønwandt secured a post as 'permanent conductor' by the Royal Opera in Copenhagen. Schønwandt was Music Director of the Royal Danish Orchestra and the Copenhagen Opera House from 2000 to 2011. His work in contemporary opera has included conducting the world premiere productions of Poul Ruders' operas The Handmaid’s Tale and Dancer in the Dark.[1] In 2006, he conducted the Royal Opera, in a production of Richard Wagner's Der Ring des Nibelungen, released on DVD by Decca.

From 2015 Schønwandt is principal conductor of the Opéra Orchestre National de Montpellier in France.

Schønwandt's recordings include the operas, symphonies and concerti of Carl Nielsen. In addition, he has made several opera recordings, such as Salome[3] and The Handmaid’s Tale.[4]

This article uses material from the article Michael Schønwandt from the free encyclopedia Wikipedia and it is licensed under the GNU Free Documentation License.

Friedrich Kalkbrenner Klavierkonzert Nr.3 a-moll op.107
Update Required To play the media you will need to either update your browser to a recent version or update your Flash plugin.