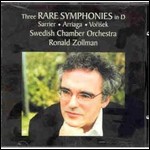 born in 1950 in Antwerpen, Flandern, Belgium

Ronald Zollman (born 1950 in Antwerp, Belgium) is a Belgian conductor. He began musical studies at age 4. He attended the Royal Conservatories in Antwerp and in Brussels, and later studied with Igor Markevitch and Nadia Boulanger.

This article uses material from the article Ronald Zollman from the free encyclopedia Wikipedia and it is licensed under the GNU Free Documentation License.

Vaclav Pichl Konzert für Violine und Orchester D-Dur op. 3 Nr. 1
Update Required To play the media you will need to either update your browser to a recent version or update your Flash plugin.