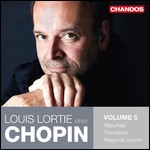 An international soloist, with over 30 recordings on the Chandos Records label, Lortie is particularly known for his interpretation of Ravel, Chopin and Beethoven.

Born in Montreal, Louis Lortie made his debut with the Montreal Symphony Orchestra at the age of thirteen and the Toronto Symphony Orchestra three years later. Soon after he performed an historic tour of the People’s Republic of China and Japan.

He won First Prize in the Ferruccio Busoni International Piano Competition in 1984. In the same year, he won the fourth place prize at the Leeds Competition. He was named an Officer of the Order of Canada, and was made a Knight of the National Order of Quebec as well as receiving an honorary doctorate from Université Laval. He teaches at Italy’s renowned Accademia Pianistica Internazionale at Imola.

Since 2016, he is a "Master in residence" at the Queen Elisabeth Music Chapel (Waterloo, Belgium).

This article uses material from the article Louis Lortie from the free encyclopedia Wikipedia and it is licensed under the GNU Free Documentation License.

Joseph Purebel Adagio ma non troppo aus dem Klarinettenkonzert A-Dur
Update Required To play the media you will need to either update your browser to a recent version or update your Flash plugin.