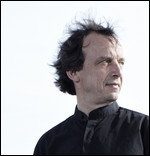 Lars Ulrik Mortensen (born 1955) is a Danish harpsichordist and conductor largely in Baroque solo and chamber music and Early music repertory. He was a professor in Munich in 1996-99 and has since then been artistic director of Concerto Copenhagen. He received the Léonie Sonning Music Prize in 2007.

Lars Ulrik Mortensen was born in 1955. His father was the conductor Bent Mortensen. He studied with Karen Englund (harpsichord) and Jesper Bøje Christensen (figured bass) at The Royal Danish Academy of Music in Copenhagen and with Trevor Pinnock in London.

Johann Sebastian Bach Air aus der Orchestersuite Nr.3 D-Dur BWV 1068
Update Required To play the media you will need to either update your browser to a recent version or update your Flash plugin.