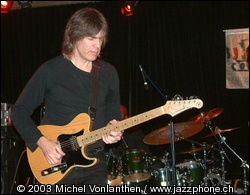 Mike Stern (born January 10, 1953) is a six-time Grammy-nominated American jazz guitarist. After playing with Blood, Sweat & Tears, he worked with drummer Billy Cobham, then with trumpeter Miles Davis from 1981 to 1983 and again in 1985. Following that, he began a solo career, releasing more than a dozen albums.

Stern was named Best Jazz Guitarist of 1993 by Guitar Player magazine. At the Festival International de Jazz de Montréal in June 2007, he was given the Miles Davis Award, which was created to recognize internationally acclaimed jazz artists whose work has contributed significantly to the renewal of the genre. In 2009 he was listed on Down Beat's list of 75 best jazz guitarist of all time. He was presented with Guitar Player magazine's Certified Legend Award on January 21, 2012.

Stern grew up in Washington, D.C., and attended the Berklee College of Music in Boston.[2] When he was twenty-two, he became a member of Blood, Sweat & Tears and spent three years with the band,[3] appearing on the albums More Than Ever and Brand New Day.

In 1979, he joined Billy Cobham's fusion band. Two years later he joined Miles Davis, making his public debut in 1981, a performance recorded on the album We Want Miles. He remained with Davis through 1983 until he was replaced by guitarist John Scofield. At the time, Stern was a heavy drinker and heroin user. In a 2009 interview, he said, "If Miles wants to put you in a rehab, you know you've got something wrong".[4] From 1983 to 1984 he toured with Jaco Pastorius (a period also characterized by heavy drug use)[5] and in 1985 returned to tour with Davis. Stern and his wife were in rehabilitation, and they were also helped by Michael Brecker and others.[4]

Stern's solo debut, Upside Downside, was released on Atlantic Records in 1986, with Jaco Pastorius, David Sanborn, and Bob Berg. From 1986 through 1988, he was a member of Michael Brecker's quintet, appearing on Don't Try This at Home. His second Atlantic album, 1988's Time in Place, featured Peter Erskine on drums, Jim Beard on keyboards, Jeff Andrews on bass, Don Alias on percussion and Don Grolnick on organ. His next album, Jigsaw, was produced by guitarist Steve Khan and included the song "Chief", Stern's tribute to Miles Davis.

In 1989, he formed a touring group with Bob Berg, Dennis Chambers, and Lincoln Goines. They remained together through 1992 and are featured on the album Odds or Evens. In 1992, Stern joined a reunited Brecker Brothers Band for two years. His acclaimed 1993 album, Standards (and Other Songs), led to his being named Best Jazz Guitarist of the Year by the readers and critics of Guitar Player. He followed that up with 1994's Is What It Is and 1996's Between the Lines. Both received Grammy Award nominations. In 1997 he released Give and Take, with bassist John Patitucci, drummer Jack DeJohnette, percussionist Don Alias and special guests Michael Brecker and David Sanborn. He won the Orville W. Gibson Award for Best Jazz Guitarist.

After fifteen years with Atlantic, Stern signed with ESC Records for the 2004 release of These Times, an eclectic album that included guest appearances by bassist Richard Bona, saxophonist Kenny Garrett, and banjoist Béla Fleck. He joined the Heads Up label with the August 2006 release of Who Let the Cats Out? In 2008, he collaborated with the Yellowjackets for their Lifecycle album, contributing two compositions and performing on most of the tracks. He toured with the Yellowjackets for much of 2008 and 2009. In February 2009, in the first in a series of articles to celebrate Down Beat's 75th anniversary, he was named one of the 75 Great Guitarists of all time.

In August 2009, Stern released Big Neighborhood, which was nominated for a Grammy Award for Best Contemporary Jazz Album.[6]

In 2014, Stern toured with guitarist Eric Johnson in the Eclectic Guitar Tour. They recorded an album of the same name.

In the summer of 2016 Stern reported a serious injury to both shoulders and especially to his right arm after tripping and falling by accident. Because of these injuries he had to pull out of his European tour and modify his guitar playing technique to be able to play on stage again.[7] In the summer of 2017 he came back to Europe on tour with a new formation called Mike Stern/Randy Brecker Band featuring Randy Brecker (trumpet), Teymur Phell (bass guitar), Lenny White (drums).[8]

In 2017, he shot a series of videos entitled "Mike Stern: Burn with Stern!" for TAGAPublishing.com where he teaches students how to play jazz guitar.[9]

An early and important guitar for Stern was a hybrid 1950s/1960s Fender Telecaster, previously owned by Roy Buchanan and Danny Gatton, which was stolen from him in an armed robbery in Boston. This guitar is the basis for a custom-made guitar built by Boston-based luthier Michael Aronson,[10] which has a Telecaster style body with an original 1950's Broadcaster neck. There is a Seymour Duncan humbucker in the neck position and a Bill Lawrence single coil in the bridge.

The Aronson guitar is in turn the basis for the Yamaha PA1511MS, the Mike Stern signature model.[10] The neck position pickup is a Seymour Duncan '59 and it has a Tele Hot Rail in the bridge.[11]

Stern uses a pair of Fender '65 Twin Reverb amps or his Yamaha G100-212. Stern's recognizable chorused sound is created in part by a Yamaha SPX-90, split for stereo. His pedal board mostly consists of Boss pedals. He uses two Boss DD-3 digital delays, one of which is set to a long delay time for "big, spacey sounds."[10] His distortion pedal is a Boss Distortion DS-1.[10]

This article uses material from the article Mike Stern from the free encyclopedia Wikipedia and it is licensed under the GNU Free Documentation License.