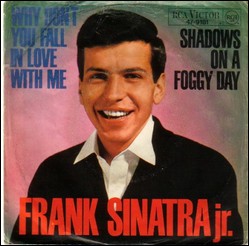 Frank Jr. is the son of legendary musician and actor Frank Sinatra, Sr. and his first wife, Nancy Barbato Sinatra. He is the younger brother of singer and actress Nancy Sinatra, and the older brother of television producer Tina Sinatra.

Born in Jersey City, New Jersey into the household of one of the most popular singers in the world, Frank Jr. hardly saw his father, who was constantly on the road either performing or working in films. However, Frank Jr. recalls wanting to become a piano player and songwriter from his earliest days. His father wanted to name him after Franklin D. Roosevelt, who was President at the time of his birth.

Sinatra was kidnapped, at the age of 19, on December 8, 1963 at Harrah's Lake Tahoe (room 417).[4] Sinatra was released two days later after his father paid the $240,000 (about $1,832,000 in 2013 dollars)[5][6] ransom demanded by the kidnappers. Barry Keenan, Johnny Irwin, and Joe Amsler were soon captured, prosecuted, convicted, and sentenced to long prison terms for kidnapping, of which they served only small portions (mastermind Keenan was later adjudged to have been legally insane at the time of the crime and hence not legally responsible for his actions).[4] Famed attorney Gladys Root represented one of the three men.

A rumor at the time was that Frank Sr. arranged this in an attempt to gain publicity for his son's fledgling singing careera rumor believed to have inspired the plot for the Hawaii Five-O episode "Tiger by the Tail"[7]but was proven to be false. The kidnappers demanded communication via payphone. During one conversation, Frank Sr. ran out of money and was disconnected. Fearing never seeing his son again, Frank Sr. decided to carry a roll of dimes with him at all times (payphones at this time cost 10 cents). This tradition lasted the rest of his life.

At the time of the kidnapping, Frank Sr. and the Rat Pack were filming Robin and the 7 Hoods. The stress of the kidnapping, in addition to the assassination of Sinatra's close friend John F. Kennedy just a few days previous, caused him to seriously consider shutting down production completely, though the film was ultimately completed.

Frank Sinatra, Jr. married Cynthia McMurry on October 18, 1998 and divorced on January 7, 2000. He has had one son from a previous relationship, Michael Sinatra (born March 1, 1987) who lives in Japan.[9] Some sources [10] have speculated about the existence of another son called Frank Sinatra III, in connection with an alleged suicide attempt of the former. Sinatra has denied all claims, stating to The Guardian: "No, I have one son, and his name is Michael."[9]

By his early teens he was performing at local clubs and venues. At age 19 he became the vocalist for Sam Donahue's band.[11] He also spent considerable time with Duke Ellington, learning the music business.[12]

Frank Jr. spent most of his early career on the road. By 1968 he had performed in 47 states and 30 countries, had guested on several television shows,[13] had hosted a summer replacement show for The Dean Martin Show, had sung with his own band in Las Vegas casinos and had been the opening act for bigger names at other casinos. During that time he gained a reputation for rigorous rehearsals and demanding standards for his musicians.[14]

Sinatra appeared in the Sammy Davis, Jr. drama A Man Called Adam in 1966. The National Archives now houses a fifteen-minute song and monologue composed by Sinatra in 1976, Over the Land. It evokes the memory of the nation's flag and the nation's experiences with the flag since the War of 1812.

Starting in 1988, at his father's request, Frank Jr. placed his career on hold in order to act as his father's musical director and conductor.[15] Poet/vocalist Rod McKuen said this:

In 1989, Sinatra sang "Wedding Vows in Vegas" on the acclaimed Was (Not Was) album, What Up, Dog?, later performing the song with the band on Late Night with David Letterman.

During the 1995-1996 television season, Sinatra was offered the role of Vic Fontaine on Star Trek: Deep Space Nine. Despite being a fan of the show and finding the role interesting, he turned it down, declaring that he only wanted to play an alien.[16] James Darren accepted the part after demurring at first because he found descriptions of the part too "on the nose", changing his mind when he read the script.

Sinatra guest-starred on an episode of Son of the Beach in the episode "You Only Come Once" playing the villain Stinkfinger, and he sang his own theme song for the character. He had a guest spot playing himself on The Sopranos, in a role either mocking or acknowledging all the stories about his father's involvement with the mob - he lets Paulie Walnuts refer to him as the "Chairboy of the Board."

Sinatra appeared in a 2006 episode of Family Guy, "Brian Sings and Swings" (Season 4, Episode 19), where he was introduced as the "Member of The Board". He performed several tunes during the show, accompanied by Stewie and Brian. During the ending credits, he sang the Family Guy theme song. He also recorded a commentary for its DVD release. He returned in a 2008 episode, "Tales of a Third Grade Nothing", where he sang with Brian again, with Stewie returning as a sideline investor supporting the duo.

In 2006, Sinatra released an album entitled That Face! including the songs "You'll Never Know" and the self-penned song "Spice".

Sinatra made a brief cameo appearance in the series premiere episode of the 2010 CBS legal comedy-drama The Defenders, as well as the show's series finale.[17]

Frank Jr. has said that his famous name has opened some doors, but "a famous father means that in order to prove yourself you have to work three times harder than the guy off the street".[18]

Music critic Richard Ginell wrote of a 2003 concert by Sinatra:

Sinatra, Jr. might have had an easier time establishing himself had he gone into real estate. But his show made me awfully glad he decided music was his calling. There aren't too many singers around with Sinatra's depth of experience in big band music, or his knowledge of the classic American songbook. There are even fewer with such real feeling for the lyrics of a song, and such a knack for investing a song with style and personality.[19]

Sinatra has composed several songs, including:

This article uses material from the article Frank Sinatra, Jr. from the free encyclopedia Wikipedia and it is licensed under the GNU Free Documentation License.