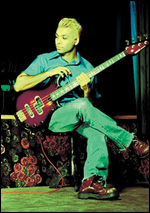 Tony Ashwin Kanal (born 27 August 1970) is a British-American musician, record producer and songwriter. Kanal is the bassist for the American rock band No Doubt. His musical work outside of the band includes producing and songwriting with artists such as reggae singer Elan Atias and No Doubt bandmate Gwen Stefani, among others.

Kanal's father Gulab and his mother Lajwanti "Lajju" are from India.[1][2] His parents emigrated from India to London, England, where Kanal was born. While most of his early years were spent in London, Kanal and his family also spent brief periods living in Toronto, Ontario, Canada, and Munster, Indiana, before eventually returning to London. At age eleven, he was taken by his family once again to the United States, where the Kanal family settled in Anaheim, California.[1] There, his parents opened a store named "Kanal's Gifts and Fashion".[3]

Kanal's father suggested that Kanal learn to play the saxophone since it was the former's favorite instrument, so he bought one for Kanal.[2] Kanal later learned how to play the bass from his schoolmate Dave Carpenter.[1] After seeing one of third wave ska band No Doubt's early shows, he joined the band as its bassist.[4] Kanal stated that his parents were ultimately supportive of his decision to pursue a career in music; however, they had wanted him "to go into a safe profession" and often reprimanded him for devoting so much time to music, sometimes at the expense of school.[5]

Kanal enrolled at California State University, Fullerton to major in psychology.[1] In October 1991, No Doubt began recording with producer Dito Godwin. When Interscope Records began turning songs down, No Doubt did it on their own. Over two years they recorded ten songs and released an album independently, that was released in 1992 as No Doubt by Interscope.

When No Doubt went on hiatus, Kanal began a career behind the mixing console. In 2004, Kanal produced three songs for the soundtrack to 50 First Dates. Also in 2004, Kanal produced and co-wrote three tracks on Gwen Stefani's first solo album Love. Angel. Music. Baby. Kanal then produced Elan Atias's debut album, Together as One, which was released in June 2006. Kanal again worked with Gwen Stefani for her follow-up solo album The Sweet Escape, released in 2006. He has created several remixes, including ones of Stefani's "Hollaback Girl" and Gang of Four's "Ether". Kanal produced the song "Rent" for the ska punk band Pepper's 2006 album No Shame.

In 2008, he collaborated on two songs titled "Sober" and "Funhouse" with Pink for her album Funhouse and also sang back-up on "Crystal Ball". In late 2009, Kanal co-wrote and played bass for a song of former Pussycat Doll Kimberly Wyatt's debut solo album.[6] Kanal also contributed on track seven of Weezer's 2010 album Hurley. He received co-writing credit for the song "Smart Girls". In 2010, Kanal co-wrote, produced, and performed bass on the track "Kiss You Up", recorded by Barbadian artist Shontelle for her second album, No Gravity.[7]

With Stefani promoting her second solo album, No Doubt began initial work on a new album without her[8] and planned to complete it after Stefani's tour was finished.[9] In March 2008, the band started making posts concerning the progression of the album on their official fan forum. Stefani made a post on 28 March 2008 stating that songwriting had commenced but was slow on her end because she was, at the time, pregnant with her second child.[10]

Manager Jim Guerinot said the yet-untitled album is being produced by Mark "Spike" Stent, who helped produce and mix Rock Steady. Between Stefani's pregnancy and recording, No Doubt did not tour in 2008, but Guerinot promised, they plan to hit the road hard in 2009 for their first full-fledged band tour in nearly five years.[11]

No Doubt announced on their official website that they would tour in the summer of 2009 with Paramore, The Sounds, Janelle Monáe, Bedouin Soundclash, Katy Perry, and Panic! at the Disco. while finishing their upcoming album, which is set for release in 2010.[12]

In 2009, No Doubt made an appearance on the television series Gossip Girl, playing a fictional band called "Snowed Out" in the episode "Valley Girls".[13] They performed their cover version of the Adam and the Ants song "Stand and Deliver".[14]

During a party where No Doubt performed in mid-1987, Stefani tried to kiss Kanal when the two went for a walk.[15] Kanal initially rejected her, later commenting, "It was pretty much an unspoken rule that nobody dates Gwen...almost like a bunch of brothers and our sister."[16] He gave in, and the two began dating secretly. The band was suspicious of them, warning Kanal against dating her, but he denied the relationship.[15]

While the band was working on its third album Tragic Kingdom, Kanal broke up with Stefani. She later explained that he was feeling "claustrophobic" in the relationship since he did not have any previous experience being in one. She stated that the break-up "took ages" because the two were close friends and Kanal did not want to hurt her. After the break-up, he offered to leave the band, but Stefani replied that she wanted him to stay.[15] Many of the songs on that album were written by Stefani about the breakup, most notably the hit "Don't Speak".[17] Many years later, Stefani co-wrote her hit song "Cool" about their relationship as friends for her 2004 debut solo album Love. Angel. Music. Baby.[18]

Kanal is married to American actress Erin Lokitz,[19] and they have two daughters.[20][21]

Kanal is a vegan and supports Farm Sanctuary.[22]

Kanal has endorsed Yamaha basses which he runs through Gallien-Krueger heads into Ampeg cabinets.[23]

This article uses material from the article Tony Kanal from the free encyclopedia Wikipedia and it is licensed under the GNU Free Documentation License.