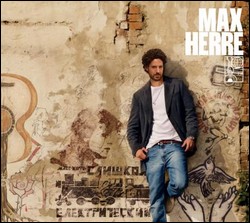 Maximilian Herre (born April 22, 1973 in Stuttgart, Baden-Württemberg), better known by his stage- and nickname Max Herre, is a German musician who rose to fame as a member of the group Freundeskreis.

He married singer Joy Denalane. They have two sons, Isaiah Naledi (01) and Jamil (03). They separated in October 2007. In March 2011, they showed up at different events together and stated that they are back together again.

He is the frontman and a founding member of the hip hop group Freundeskreis and the Kolchose, a federation of artists from Stuttgart.

After the birth of his two sons, Herre decided to have a time-out after almost five years of success with the band.

Herre collaborated with the German rapper Curse for his album Innere Sicherheit. He produced his wife Joy Denalane's album Mamani. His own debut solo album Max Herre was released in 2004. In 2012, his new solo album Hallo Welt! was released.

This article uses material from the article Max Herre from the free encyclopedia Wikipedia and it is licensed under the GNU Free Documentation License.

Frédéric Chopin Nocturne E-Dur op. 62 Nr. 2
Update Required To play the media you will need to either update your browser to a recent version or update your Flash plugin.