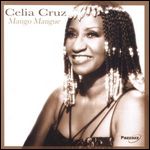 Úrsula Hilaria Celia de la Caridad Cruz Alfonso de la Santísima Trinidad also known by her stage name Celia Cruz (October 21, 1925 July 16, 2003) was a Cuban salsa singer/performer. One of the most popular salsa artists of the 20th century, she earned twenty-three gold albums and was renowned internationally as the "Queen of Salsa", "La Guarachera de Cuba", as well as The Queen of Latin Music.[1][2]

She spent much of her career working in the United States and several Latin American countries. Leila Cobo of Billboard Magazine once said "Cruz is indisputably the best known and most influential female figure in the history of Cuban music".

Úrsula Hilaria Celia de la Caridad Cruz Alfonso was born on October 21, 1925[2] in the diverse, working-class neighborhood of Santos Suárez in Havana, Cuba, the second of four children. Her father, Simon Cruz, was a railroad stoker and her mother, Catalina Alfonso was a homemaker who took care of an extended family of fourteen.[2][3]

While growing up in Cuba's diverse 1930s musical climate, Cruz listened to many musicians who influenced her adult career, including Fernando Collazo, Abelardo Barroso, Pablo Quevedo and Arsenio Rodríguez. Despite her mother's opposition and the fact that she was Catholic, as a child Cruz learned santería songs from her neighbor who practiced santería.[4] Cruz also later studied the words to Yoruba songs with colleague Mercedita Valdes (an Akpwon santería singer) from Cuba and made various recordings of this religious genre, even singing back up for other female akpwons like Candita Batista.[5]

As a teenager, her aunt took her and her cousin to cabarets to sing, but her father encouraged her to attend school in the hope she would become a teacher. However, one of her teachers told her that as an entertainer she could earn in one day what most Cuban teachers earned in a month. Cruz began singing in Havana's radio station Radio Garcia-Serra's popular "Hora del Té" daily broadcast, where she sang the tango "Nostalgias" and won a cake as first place. She often won cakes and also opportunities to participate in more contests.[6] Her first recordings were made in 1948 in Venezuela.

In 1950, Cruz made her first major breakthrough, after the lead singer of the Sonora Matancera, a renowned Cuban orchestra, left the group and Cruz was called to fill in. Cruz was hired permanently by the orchestra, but wasn't well accepted by the public at first.[7] However, the orchestra stood by their decision, and soon Cruz became famous throughout Cuba. During the 15 years she was a member, the band traveled all over Latin America, becoming known as "Café con leche" (coffee with milk). Cruz became known for her trademark shout "¡Azúcar!" ("Sugar!" in Spanish). The catch phrase started as the punch line for a joke Cruz used to tell frequently at her concerts. Once, she ordered café cubano (Cuban coffee) in a restaurant in Miami. The waiter asked her if she'd like sugar, and she replied that, since he was Cuban, he should know that you can't drink Cuban coffee without it! After having told the joke so many times, Cruz eventually dropped the joke and greeted her audience at the start of her appearances with the punch line alone. In her later years, she would use the punch line a few times, to later say: No les digo más 'Azúcar', pa' que no les dé diabetes! which means "I won't say 'Sugar' anymore so that you won't get diabetes".

With Sonora Matancera, she appeared in cameos in some Mexican films such as Salon México (1950) and Una gallega en La Habana (1952).

When Fidel Castro assumed control of Cuba in 1959, Cruz and her husband, Pedro Knight, refused to return to their homeland and became citizens of the United States. In 1966, Cruz and Tito Puente began an association that would lead to eight albums for Tico Records. The albums were not as successful as expected. However, Puente and Cruz later joined the Vaya Records label. There, she joined accomplished pianist Larry Harlow and was soon headlining a concert at New York's Carnegie Hall.

Cruz's 1974 album with Johnny Pacheco, Celia y Johnny, was very successful, and Cruz soon found herself in a group named the Fania All-Stars, which was an ensemble of salsa musicians from every orchestra signed by the Fania label (owner of Vaya Records). With the Fania All-Stars, Cruz had the opportunity to visit England, France, Zaire (today's DR Congo), and to return to tour Latin America; her performance in Zaire is included in the film Soul Power.[8] In the late 1970s, she participated in an Eastern Air Lines commercial in Puerto Rico, singing the catchy phrase ¡Esto sí es volar! (This really is flying!).

In 1976, she participated in a documentary film Salsa about the Latin culture, along with figures like Dolores del Río and Willie Colon.

Celia Cruz used to sing the identifying spot for WQBA radio station in Miami, formerly known as "La Cubanísima": "I am the voice of Cuba, from this land, far away,..., I am liberty, I am WQBA, the most Cuban! (Yo soy de Cuba, la voz, desde esta tierra lejana, ..., soy libertad, soy WQBA, Cubanísima!) During the 1980s, Cruz made many tours in Latin America and Europe, doing multiple concerts and television shows wherever she went, and singing both with younger stars and stars of her own era. She began a crossover of sorts, when she participated in the 1988 feature film Salsa alongside Robby Draco Rosa.

In 1990, Cruz won a Grammy Award for Best Tropical Latin Performance - Ray Barretto & Celia Cruz - Ritmo en el Corazon. She later recorded an anniversary album with Sonora Matancera. In 1992, she starred with Armand Assante and Antonio Banderas in the film The Mambo Kings. In 1994, President Bill Clinton awarded Cruz the National Medal of Arts. In 2001, she recorded a new album, on which Johnny Pacheco was one of the producers.

On July 16, 2002, Cruz performed to a full house at the free outdoor performing arts festival Central Park SummerStage in New York City. During the performance she sang "Bemba Colora." A live recording of this song was subsequently made available in 2005 on a commemorative CD honoring the festival's then 20-year history entitled, "Central Park SummerStage: Live from the Heart of the City". Cruz appeared on the 2006 Dionne Warwick album My Friends & Me.

On July 16, 2003, Cruz died of brain cancer[9][10][11] at her home in Fort Lee, New Jersey, at the age of 77. Her husband, Pedro Knight (died February 3, 2007), was there for her while she was going through cancer treatments. She had no children with him. After her death, her body was taken to lie in state in Miami's Freedom Tower, where more than 200,000 fans paid their final respects.[12] Knight had Cruz buried in a granite mausoleum that he had built in Woodlawn Cemetery in the Bronx earlier in 2003, when she was dying. Knight chose the plot on which it stands, which is near the gravestones of Duke Ellington and Miles Davis, because it was accessible to fans, and had four windows built into it so that fans could see inside when paying their respects. Knight was known to share his time there with visiting fans. Knight himself was buried with Cruz in the same mausoleum following his death on February 3, 2007.[13] An epilogue in her autobiography notes that, in accordance with her wishes, Cuban soil which she had saved from a visit to Guantánamo Bay was used in her entombment.

In February 2004, her last album, Regalo del Alma, won a posthumous award at the Premios Lo Nuestro for best salsa release of the year. It was announced in December 2005 that a musical called Azucar! would open in Tenerife before touring the world. The name comes from Cruz's well-known catch phrase of "¡Azúcar!"

On May 18, 2005, the National Museum of American History, administered by the Smithsonian Institution and located in Washington, D.C., opened "¡Azúcar!", an exhibit celebrating the life and music of Celia Cruz. The exhibit highlights important moments in Cruz's life and career through photographs, personal documents, costumes, videos, and music.

On September 26, 2007, through May 25, 2008, Celia, a musical based on the life of Celia Cruz, played at the off-Broadway venue, New World Stages. Some performances were in Spanish and some in English. The show won four 2008 HOLA awards from the Hispanic Organization of Latin Actors.[19]

On March 16, 2011, Celia Cruz was honored by the United States Postal Service with a commemorative postage stamp. The Cruz stamp was one of a group of five stamps honoring Latin music greats, also including Selena, Tito Puente, Carmen Miranda, and Carlos Gardel.

The Smithsonians National Museum of American History collaborated with photographer Robert Weingarten to create an object-based portrait of Celia Cruz featuring artifacts in the museum. The portrait was unveiled October 3, 2012.[20]

This article uses material from the article Celia Cruz from the free encyclopedia Wikipedia and it is licensed under the GNU Free Documentation License.