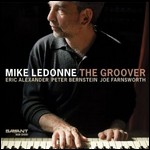 Michael LeDonne (born 1956 in Bridgeport, Connecticut) is a jazz pianist and organist known for post-bop and hard bop.

His parents ran a music store and his father was a jazz guitarist. He played with his father at gigs from the age of ten. At 21 he graduated from the New England Conservatory of Music and moved to New York City, playing with the Widespread Depression Jazz Orchestra. In 1988 he had his recording debut and joined Milt Jackson's Quartet. He performed with the band for 11 years and eventually became the Quartet's musical director. He has also worked with many of the masters of jazz history - Benny Goodman, Sonny Rollins, Bobby Hutcherson, Art Farmer, Dizzy Gillespie, and others. He currently works with Benny Golson (since 1996) and performs under his own name all over the world.

LeDonne is also known as one of the leading players of the Hammond B3 organ. He has made 4 recordings as a leader on organ, was nominated for Best Keyboards 2012 but the Jazz Journalists Association and won the Downbeat critic's poll for "Rising Star" on organ. - Since 2001 he's performed every Tuesday evening at Smoke Jazz Club in New York City.

Jazz pianist Oscar Peterson has described LeDonne as "one of the most promising and talented pianists of this era."

This article uses material from the article Mike LeDonne from the free encyclopedia Wikipedia and it is licensed under the GNU Free Documentation License.