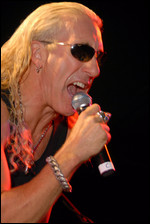 Daniel "Dee" Snider (born March 15, 1955) is an American singer-songwriter, screenwriter, radio personality, and actor. Snider is most famous for his role as the frontman of the heavy metal band Twisted Sister. He was ranked 83 in the Hit Parader's Top 100 Metal Vocalist of All Time.[1]

Born in Astoria, Queens, New York, Snider grew up in nearby Baldwin and graduated from Baldwin Senior High School in 1973.[2] His father, Bob, is a retired New York State Trooper and Nassau County court clerk, and his mother, Marguerite, is a retired art teacher.[3] His father was Jewish and his mother was from a Catholic family of Swiss descent.[4] Snider and his siblings were raised as Episcopalians after his mother joined the church.[4] As a child, he sang in a church choir, several school choruses, and Baldwin HS Concert Choir. He also was selected for the All-State Chorus by singing.[5] While in eighth grade, Snider was in a Black Sabbath cover band.[6]

In early 1976, Snider joined Twisted Sister and became the sole songwriter of the band thereafter. The group released their first studio album, Under the Blade, in September 1982 and developed a following in the UK. Less than a year later, Twisted Sister released their sophomore effort, You Can't Stop Rock 'n' Roll. Their third album, Stay Hungry, hit shelves on May 10, 1984. This would become the band's most successful record with the hits "We're Not Gonna Take It" and "I Wanna Rock." To emphasize the "twisted sister" image, Snider adopted a trademark persona of metal-inspired drag with long blond hair, an excessive amount of eye shadow and rouge, and bright red lipstick.

During the mid 1980s, before the premiere of Headbangers Ball, the first MTV program to consist entirely of heavy metal videos was Heavy Metal Mania. The first episode aired in June 1985 and was hosted by Dee Snider. It featured metal news, interviews with metal artists, and in-studio co-hosts. That same year in November, Twisted Sister released Come Out and Play which sold over 500,000 copies but was marred by a poor concert tour.

In 1985, a Senate hearing was instigated by the Parents Music Resource Center (PMRC), who wanted to introduce a parental warning system that would label all albums containing offensive material. The system was to include letters identifying the type of objectionable content to be found in each album (e.g. O for occult themes, S for sex, D for drugs, V for violence, etc.). Dee Snider, John Denver, and Frank Zappa all testified against censorship and the proposed warning system. Such a system was never implemented, but the result of the hearing brought about what is now the generic "Parental Advisory: Explicit Content" label.

The PMRC was initially formed by the wives of Washington, D.C. power brokers Senator Al Gore (D-TN), and Secretary of State James Baker. Tipper Gore in particular became the face of the PMRC and a public foil for Snider in the hearings. Ironically, in the 2000 US Presidential Election cycle, Snider endorsed Vice President Gore for office.

A fifth Twisted Sister album would be made in 1987's Love Is for Suckers. The record was originally planned to be a Dee Snider solo effort, but Atlantic Records encouraged a release under the Twisted Sister name. Touring lasted only into October that year and on the 12th of that month, Snider announced his departure from the band. It was during this time that Snider formed Desperado, a band featuring ex-Iron Maiden drummer Clive Burr, ex-Gillan guitarist Bernie Torme, and bassist Marc Russel.[7] The group's only album, Ace, has never been officially released but was heavily bootlegged on CD under the title Bloodied But Unbowed.

In 1993, he composed the theme song for The Terrible Thunderlizards.

In 1997, Dee Snider began hosting the House of Hair, a syndicated 1980s hard rock/heavy metal radio show that airs on over 200 radio stations across North America. It is syndicated by the United Stations Radio Networks. The show's format runs two hours and features Snider's closing catchphrase, "If it ain't metal, it's crap!"

In 1998, Snider had penned a song entitled "The Magic of Christmas Day (God Bless Us Everyone)" which would be recorded in 1998 by Celine Dion for her album These Are Special Times. According to Snider, Dion at the time was not aware of who wrote the song. Later that year, he also wrote and starred in the horror film Strangeland. Snider has also penned the script to a sequel which has the working title of Strangeland: Disciple. As of January 2008, however, Snider was less than optimistic that it would ever see the light of day, saying in an interview with Bullz-Eye.com that he had reached a point where he should "put a sign on my website that says, 'Ygot ten million dollars? Give me a call. Ive got the script ready to go, Robert Englunds attached, Im attached. If somebodys serious and wants to make it, call me. But dont call me til youre ready to hand the check over.' In May 2009, Dee Snider revealed on his radio show,"The House Of Hair," that Strangeland: Rising Sons will go ahead and is set to begin shooting in the fall of 2009 and is slated for a 2010 release.

From June 1999 to August 2003, Snider hosted a morning radio show on a Hartford, Connecticut Clear Channel station, Radio 104 (104.1 FM WMRQ), called Dee Snider Radio. His show returned to the air at night in August 2004 on 93.3 WMMR in Philadelphia, Pennsylvania until June 2005. He fondly referred to his listeners as his "Peeps," and "DEE" euro stickers, printed by the station, could be seen on the bumpers of his fans' cars throughout Connecticut, New York, New Jersey, and Massachusetts. Other members of the morning show included Nick Lentino, Beth Lockwood, "Psycho Dan" Williams, Sean Robbins, and "Darkside Dave" Wallace. He frequently featured high-profile guests, including Ozzy Osbourne, pro wrestler Mick Foley, and KISS singer/bassist Gene Simmons.

In 2001, Snider was the voice of Gol Acheron, the main villain for the PlayStation 2 video game Jak and Daxter: The Precursor Legacy. The following year, he rejoined with the reunited Twisted Sister. Snider also played himself in the 2002 TV-movie Warning: Parental Advisory. In 2003, he appeared with actor Arnold Schwarzenegger during his drive to recall incumbent California Governor Gray Davis. Snider sang the Twisted Sister hit, "We're Not Gonna Take It," which was adopted by the Schwarzenegger campaign.

Snider also voiced Angry Jack in the episode "Shell Shocked" for the Nickelodeon cartoon SpongeBob SquarePants. He admitted to being a huge fan of the show during an hour-long 10th anniversary documentary of the show in 2009, and to be asked to voice a character on the show was a real honor. He changed the lyrics of his famous "I Wanna Rock" to "Goofy Goober Rock" for the 2004 The SpongeBob SquarePants Movie.

Snider narrates and hosts many shows and specials on VH1, movie trailers, behind the scenes segments, and DVD special features. He was featured as the 'voice' in the bumpers for MSNBC's 2001/2002 "Fiercely Independent" branding campaign. Every year since 2004, Snider has narrated a live show known as Van Helsing's Curse which tours the US around Halloween giving a mix of famous music with dark overtones and an occasional part of a storytelling to accompany the music. The concert has also been released on CD. Snider hosted VH1's 2008 "Aftermath" concert in remembrance of the victims and survivors of the 2003 Station nightclub fire.

Snider returned to radio in June 2006 with Fangoria Radio on Sirius Satellite Radio channel 102 from 9-12 Eastern.

During winter of 2008, Snider was featured as a contestant on CMT's Gone Country. The show recruited famous musical celebrities who competed against each other to win a chance to release a country song. Also in 2008, Snider appeared on the first episode of season two's Kitchen Nightmares who Gordon Ramsay had recruited as part of the marketing for the re-launch of the Handlebar restaurant. On the show, Snider donated a motorcycle for auction in which customers of the Handlebar were able to bid on through the Handlebar restaurants website.

Dee hosts DEAD ART on Gallery HD, a show about the beauty and art of cemeteries. He also hosts House of Hair, a radio show that plays heavy metal music. Snider has made appearances on the IFC Channel's original series Z Rock as himself playing the character of a "rock guru."

On July 27, 2010.,[8] Dee Snider and his family began appearing in the reality television show "Growing Up Twisted," airing on the Arts and Entertainment Network.

On October 8, 2010 started an 11-week run in the cast of Rock of Ages as Dennis, the owner of The Bourbon Room, with his official start date being October 11. [9]

In 2011, Snider performed with Ohio-based metalcore band Attack Attack! on stage at the Bamboozle Festival playing their song "Turbo Swag". On the May 15, 2011 episode of The Apprentice (U.S. season 11), Snider appeared to assist John Rich with his final challenge. He starred in a commercial featuring a mock audition where he came on as himself, and after drinking a soda turns into the lead singer from Twisted Sister (himself). Snider agreed to come because he is personal friends with John Rich and wanted to support the charity effort for St. Jude Medical Center.

On the Valentine's Day 2012 taping of Late Night with Jimmy Fallon, Snider partnered with Donald Trump in a skit based upon the format of the TV game show, Password. On February 19, 2012, Snider began appearing as one of 18 contestants vying to become Trump's next Celebrity Apprentice and was fired after the eighth task during the seventh episode.

In 2012 Snider appears as main character of a commercial airing for the company "Unibet". The video[13] has been broadcasted on commercial Norwegian television from March 5th 2012 thorough the whole summer. In the spot Snider sings, in his typical look as leader of the Twisted Sisters, a rock song called "Bet", written by Snider himself and composed by the Norwegian heavy metal artist Ronni Le Tekrø.

On September 6, 2012 Snider performed "We're Not Gonna Take It" on America's Got Talent.

Snider has been married to his wife Suzette, a costume designer, since October 21, 1981.[15] They have four children, Jesse Blaze Snider (September 19, 1982), Shane Royal Snider (February 29, 1988), Cody Blue Snider (December 7, 1989), and Cheyenne Jean Snider (October 31, 1996) who is currently in the band They All Float. His eldest son Jesse hosted MTV2 Rock, a music video countdown program in 2003, and was the runner-up in MTV's 2008 show Rock the Cradle. Dee appeared on the show as Jesse's mentor. Jesse is also the lead singer of the punk metal band Baptized By Fire. Cody directed a music video for the band, Motionless in White (for the song "Immaculate Misconception) to where Dee guest-starred in its filming.[11]

Snider currently lives part-time in East Setauket, New York.[17] He appeared on MTV Cribs in 2005 to show his Long Island home, along with two of his four children, Shane and Cheyenne.

Snider is a personal friend of professional wrestlers Mick Foley and Chris Jericho.

In 2008, he stated in a TMZ interview that he would be voting for Barack Obama because John McCain (whom he liked and supported for many years) would not acknowledge George W. Bush's mistakes that he made while in office.[18]

At the PMRC hearings, Dee Snider stated: "I was born and raised a Christian and I still adhere to those principles."[19]

Other appearances in media

This article uses material from the article Dee Snider from the free encyclopedia Wikipedia and it is licensed under the GNU Free Documentation License.