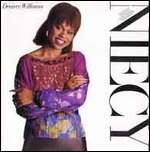 June Deniece Chandler (born June 3, 1950 in Gary, Indiana), known by her stage name Deniece "Niecy" Williams is an American Grammy Award-winning singer, songwriter and record producer who achieved success in the 1970s and 1980s. Williams, whose music has been influenced by Soul and Funk, is known for her hits such as "Let's Hear It for the Boy", "It's Gonna Take a Miracle", and for her many vocal duets with Johnny Mathis.

Williams attended Morgan State University in Baltimore, MD in the hopes of becoming a registered nurse and an anaesthetist but dropped out after a year and a half. "You have to be a good student to be in college, and I wasnt.[1] She also performed on the side during that time (I got a part-time job singing at a club, Casino Royal, and I liked it. It was a lot of fun.)[1] During those years Williams worked also in a telephone company and as a ward clerk in the Chicago Mercy Hospital.[1]

In the 1970s she became a backup vocalist for Stevie Wonder as part of "Wonderlove".

She left Wonder in 1975 and teamed up with producer Maurice White of Earth, Wind & Fire and after signing to Columbia Records, her 1976 debut album entitled This Is Niecy was released. The single "Free" reached #2 on the Black Singles chart, #25 on the Billboard Hot 100, and #1 on the British Singles chart. The album also featured "Cause You Love Me Baby" (which charted separately on the R&B chart as the flip side of "Free") and "That's What Friends Are For". She also shared a #1 hit on the Billboard Hot 100 chart with pop singer Johnny Mathis in 1978 with the duet "Too Much, Too Little, Too Late". The duet also topped the Black Singles and Adult Contemporary charts. Williams also topped the dance charts with her disco single "I've Got the Next Dance". Mathis and Williams also recorded the popular theme to the 1980s sitcom Family Ties, "Without Us".

Williams moved on to the American Recording Company (ARC) in the early 1980s where she scored the top ten R&B smash hit "Silly." in 1981. The following year, famed producer Thom Bell helped Williams score another #1 R&B chart-topper with her remake of The Royalettes' "It's Gonna Take a Miracle", which became a Top 10 pop hit as well, reaching #10. In 1984, Williams released the album Let's Hear It for the Boy, in which the title track reached #1 on the Billboard Hot 100 and was featured on the soundtrack to Footloose. She also contributed vocals, along with Maurice White, to the song "And Then" from Weather Report's album Mr. Gone (album) released in 1982.

Williams continued releasing albums during the 1980s such as Hot On The Trail (1986), Water Under The Bridge (1987), and As Good As It Gets (1988), which featured her last Top Ten hit to date, "I Can't Wait", written by Skylark. However, in part due to a lack of promotion from her record company, her mainstream popularity faded.

In 2003, Williams appeared in the holiday movie Christmas Child. From 1996 to 2004, Williams presented her own BBC radio show in the UK, showcasing the best in new gospel and inspirational music.

Deniece Williams has a four-octave range and distinctive soprano voice. Her vocal range was also pointed out by The New York Times, "Miss Williams mounted a spectacular vocal display in which her penetrating, feline soprano soared effortlessly to E flat above high C, and she worked various vowel sounds into prolonged feats of vocal gymnastics".[2]

In pointing to Williams's similar vocal ability as her former musical icon and colleague (Minnie Riperton), Mark Anthony Neal in referencing Jill Scott's agility in displaying vocal acrobatics, states, "Scott draws on her upper register recalling the artistry of the late "songbird" Minnie Riperton and Deniece Williams".[3] According to Monica Haynes of Post-Gazette.com, Williams "has the kind of range that would make Mariah Carey quiver".[4]

After more than a decade Williams' new R&B album, titled Love, Niecy Style, was released on April 24, 2007 on Shanachie Records. The disc was produced by veteran "Sound of Philly" man Bobby Eli. It has received positive review from Starpulse [5], soultracks.com,[6] and Jet. The disc charted at #41 on Billboard R&B/Hip Hop Albums chart.

Williams returned to her hometown of Gary, IN for a performance to mark the re-opening of the historic Glen Theater on October 13, 2007. After giving a stellar performance, Williams was recognized by Indiana State Representative Vernon G. Smith as an Outstanding Hoosier.

Williams returned to Gospel music, charting again in October 2007. The song, "Grateful-The Redication", recorded with Wanda Vaughn of The Emotions and Sherree Brown debuted at #40 debut on the Billboard Adult R&B Singles chart. This was Williams' first entry on the singles chart since 1989.

On April 29, 2008 Williams announced that she is preparing a proposal to establish a program called KOPKids of Promisein her hometown of Gary, Indiana. Williams said the program will include a center with classes and programs dedicated to education and the performing arts.[7]

On August 27, 2008 a new song/video entitled "One Kiss" was posted on YouTube. The song is produced by the Haven Media Group and the video directed by noted director Dabling Harward (Idlewild, When We Were Kings). Also posted on same date was an inspirational Barack Obama anthem entitled '"A Change We Can Believe In"'. The song is written by Williams, percussionist Jerry Peters and songwriter Harvey Mason. To date there are three versions of "A Change We Can Believe In," a "universal" version which features a 160-voice chorus (currently being viewed); a second R&B/Gospel-infused version featuring Williams on lead vocal; and the final, orchestral/instrumental arrangement for a variety of post-production applications.

On June 27, 2010 Deniece performed her song "Silly" at the Bet Awards featuring Monica.

The Grammy Awards are awarded annually by the National Academy of Recording Arts and Sciences. Deniece Williams has received 4 awards out of 12 nominations.

This article uses material from the article Deniece Williams from the free encyclopedia Wikipedia and it is licensed under the GNU Free Documentation License.

Franz Schubert Andante con moto aus der Sinfonie C-Dur D 944 "Die Grosse"
Update Required To play the media you will need to either update your browser to a recent version or update your Flash plugin.