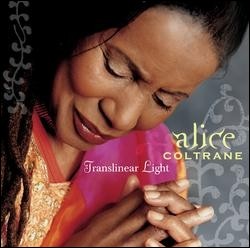 Alice Coltrane, née McLeod (August 27, 1937 January 12, 2007) was an American jazz pianist, organist, harpist, and composer, and the second wife of jazz saxophonist and composer John Coltrane. One of the few harpists in the history of jazz, she recorded many albums as a bandleader. Her essential recordings were made in the late 1960s and early 1970s for Impulse! Records.[1]

Born in Detroit, Michigan, Alice McLeod studied classical music, and also jazz with Bud Powell in Paris, France, where she worked as the intermission pianist at the Blue Note Jazz Club in 1960. It was there that she was broadcast on French television in a performance with Lucky Thompson, Pierre Michelot and Kenny Clarke.[2] She began playing jazz as a professional in Detroit, with her own trio and as a duo with vibist Terry Pollard. She married Kenny Hagood in 1960 and had a daughter, Michele, with him. From 1962-63 she played with Terry Gibbs's quartet, during which time she met John Coltrane. In 1965 they were married in Juárez, Mexico. John Coltrane became stepfather to Alice's daughter Michele and the couple had three children: John Jr. (1964-1982), a drummer; Oranyan (b. 1967), a DJ; and Ravi (b. 1965), a saxophonist.

In January 1966 she replaced McCoy Tyner as pianist with John Coltrane's group. She subsequently recorded with him and continued playing with the band until his death on July 17, 1967. After her husband's death she continued to play with her own groups, later including her children, moving into progressively more meditative music.

Coltrane was a devotee of the Indian guru Sathya Sai Baba.[3] In 1972, she moved to California, where she established the Vedantic Center in 1975.[4] By the late 1970s she had changed her name to Turiyasangitananda.[5] Coltrane was the spiritual director, or swamini, of Shanti Anantam Ashram (later renamed Sai Anantam Ashram in Chumash Pradesh) which the Vedantic Center established in 1983 near Malibu, California.[6] On rare occasions, she continued to perform publicly under the name Alice Coltrane.[7][8]

The 1990s saw renewed interest in her work, which led to the release of the compilation Astral Meditations, and in 2004 she released her comeback album Translinear Light. Following a 25-year break from major public performances, she returned to the stage for three U.S. appearances in the fall of 2006, culminating on November 4 with a concert for the San Francisco Jazz Festival with her son Ravi, drummer Roy Haynes, and bassist Charlie Haden.[8]

Paul Weller dedicated his song "Song For Alice (Dedicated to the Beautiful Legacy of Mrs. Coltrane)", from his album 22 Dreams, to Coltrane; the track entitled "Alice" on Sunn O)))'s 2009 album Monoliths & Dimensions was similarly inspired. Electronic musician Flying Lotus is the grand-nephew of Alice Coltrane.[9] The song "That Alice" on Laura Veirs' album Warp and Weft is about Coltrane.[10]

This article uses material from the article Alice Coltrane from the free encyclopedia Wikipedia and it is licensed under the GNU Free Documentation License.