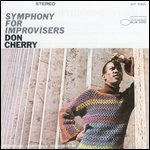 Donald Eugene Cherry (November 18, 1936 – October 19, 1995) was an innovative African-American jazz cornetist whose career began with a long association with saxophonist Ornette Coleman. He went on to live in many parts of the world and work with a wide variety of musicians.

Cherry was born in Oklahoma City, Oklahoma, and raised in Los Angeles, California. After learning various brass instruments in high school, by the early 1950s he was playing with jazz musicians in Los Angeles, sometimes acting as pianist in Art Farmer's group.[1] He also toured with saxophonist James Clay.[2]

Cherry became well known in 1958 when he performed and recorded with Ornette Coleman, first in a quintet with pianist Paul Bley and later in what became the predominantly piano-less quartet which recorded for Atlantic Records. During this period, "his lines ... gathered much of their freedom of motion from the free harmonic structures."[3]

Cherry co-led the avant-garde session which saw John Coltrane replacing Coleman in the Quartet, recorded and toured with Sonny Rollins, was a member of the New York Contemporary Five with Archie Shepp and John Tchicai, and recorded and toured with both Albert Ayler and George Russell. His first recording as a leader was Complete Communion for Blue Note Records in 1965. The band included Coleman's drummer Ed Blackwell as well as saxophonist Gato Barbieri, whom he had met while touring Europe with Ayler.

After leaving Coleman, Don Cherry eschewed the trend towards funk/fusion and continued to play sparse jazz, often in small groups and duets (many with ex-Coleman drummer Ed Blackwell) during a long sojourn in Scandinavia and other locations.

He later appeared on Coleman's 1971 LP Science Fiction, and from 1976 to 1987 reunited with Coleman alumni Dewey Redman, Charlie Haden, and Blackwell in the band Old And New Dreams,[4] recording four albums with them, two for ECM and two for Black Saint, where his "subtlety of rhythmic expansion and contraction" was noted.[5]

In the 1970s he ventured into the developing genre of world fusion music. Cherry incorporated influences of Middle Eastern, traditional African, and Indian music into his playing. He studied Indian music with Vasant Rai in the early seventies. From 1978 to 1982, he recorded three albums for ECM with "world jazz" group Codona, consisting of Cherry, percussionist Nana Vasconcelos and sitar and tabla player Collin Walcott.[6]

Cherry also collaborated with classical composer Krzysztof Penderecki on the 1971 album "Actions." In 1973, he co-composed the score for Alejandro Jodorowsky's film The Holy Mountain together with Ronald Frangipane and Jodorowsky.

During the 1980s, he recorded again with the original Ornette Coleman Quartet on In All Languages, as well as recording El Corazon, a duet album with Ed Blackwell.

Other playing opportunities in his career came with Carla Bley's Escalator Over The Hill project, and recordings with Lou Reed, Ian Dury, Rip Rig + Panic and Sun Ra.

In 1994, Cherry appeared on the Red Hot Organization's compilation CD, Stolen Moments: Red Hot + Cool, on a track titled "Apprehension" alongside The Watts Prophets.[7] The album, meant to raise awareness of the AIDS epidemic in African American society was named "Album of the Year" by Time Magazine.

Don Cherry was 58 when he died in Málaga, Spain, in 1995 due to liver failure caused by hepatitis.[8]

His stepdaughters Neneh Cherry and Titiyo and his sons David Cherry and Eagle-Eye Cherry are also musicians.

Don Cherry was closely associated with both the cornet and pocket trumpet.[9] The pocket trumpet helped Cherry produce his distinct sound as well as allowing him to "smear" notes more easily. He often spoke about changing horns and mouthpiece sizes to constantly keep him in unfamiliar territory when playing and aiding in the avoidance of cliches. Even though he is mostly associated with the pocket trumpet, the majority of his recordings are on the standard cornet. He has no known recordings on the standard trumpet.

After returning from a musical/cultural journey through Africa, Cherry often played a stringed instrument with a gourd body called a doussn'gouni. He also collected a variety of other African instruments on his journey, which he mastered and often played in performances and recordings.

He also performed as a percussionist and pianist, often playing the cornet with his right hand while playing the piano with the left.

With the New York Contemporary Five

This article uses material from the article Don Cherry (jazz) from the free encyclopedia Wikipedia and it is licensed under the GNU Free Documentation License.