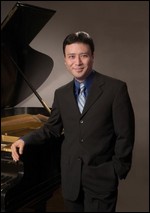 In June 1997 Nakamatsu won the Gold Medal at the Tenth Van Cliburn International Piano Competition in Fort Worth, Texas. He is the first American to win this prize since 1981. Right after the competition, he quit his job as a high school German teacher to pursue a career as a classical pianist. He did not attend a music conservatory or major in music while he attended college and graduate school.

Nakamatsu is featured in the documentary movie "Playing with Fire": The Tenth Van Cliburn International Piano Competition, which aired on PBS television and is available on DVD.

This article uses material from the article Jon Nakamatsu from the free encyclopedia Wikipedia and it is licensed under the GNU Free Documentation License.