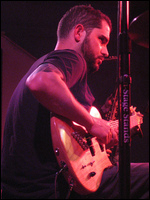 Charlie Hunter (born May 23, 1967) is an American guitarist, composer, and bandleader. First coming to prominence in the early 1990s, Hunter plays custom-made seven- and eight-string guitars on which he simultaneously plays bass lines, chords, and melodies. Critic Sean Westergaard described Hunter's technique as "mind-boggling...he's an agile improviser with an ear for great tone, and always has excellent players alongside him in order to make great music, not to show off."[1] Hunter's technique is rooted in the styles of jazz guitarists Joe Pass and Tuck Andress, two of his biggest influences, who blended bass notes with melody in a way that created the illusion of two guitars.[2]

A native of Rhode Island, Hunter was around guitars at an early age because his mother repaired them for a living.[3] He and his mother and sister lived for several years on a commune in Mendocino County, California, then settled in Berkeley. Hunter attended Berkeley High School and Phillips Exeter Academy and took lessons from rock guitarist Joe Satriani. At eighteen he moved to Paris.[3] He has stated that busking in Paris gave him on the job training.[4] Returning to San Francisco, he played seven-string guitar and organ in Michael Franti's political rap group, The Disposable Heroes of Hiphoprisy. In 1992, they were one of the opening acts for U2's Zoo TV Tour.

On his debut album, Charlie Hunter Trio (1993), he played seven-string guitar with Dave Ellis on saxophone and Jay Lane on drums.[3] On the next album, Bing, Bing, Bing! (Blue Note, 1995), he played an eight-string guitar custom built by Ralph Novak. In the 1990s, Hunter played in the band T. J. Kirk, which got its name from three musicians whose music it covered: Thelonious Monk, James Brown, and Rahsaan Roland Kirk.[3] The band released two albums before breaking up.[2]

Hunter co-founded Garage a Trois, a jazz fusion band[3] with Stanton Moore and Skerik,[5] and Groundtruther with Bobby Previte.[2][3] In the summer of 2007, he toured in a trio with keyboardist Erik Deutsch and drummer Simon Lott[3] and recorded the album Mistico (Fantasy, 2007).

He performed on three songs on D'Angelo's album Voodoo (2000), including "The Root".[6] He has stated that the session for the song was the most challenging session he has worked on.[6]

He was an inaugural member of the Independent Music Awards' judging panel to support independent artists.[7]

Hunter plays a custom seven-string guitar made by Jeff Traugott. Previously, Hunter played a custom-made, eight-string guitar made by luthier Ralph Novak of Novax Guitars. He played chords and lead guitar solos on the top five strings (tuned ADGBe), and simultaneously played bass lines on the bottom three strings (tuned EAD). With the addition of a Hughes & Kettner Tube Rotosphere (a Leslie rotary speaker simulator), his unique style produced a sound similar to that of a Hammond organ—an instrument he set out to imitate.[8]

In 2006, Hunter removed the top guitar string and had the neck of his guitar reworked and now plays a modified 7-string on the formerly-8 string body. Hunter has mentioned that because of his small hands, he had to move out of position to make use of the 8th string and thus wasn't using it much. A change in Hunter's style away from the organ sound into a more blues and distortion based sound happened at the same time. After removing the 8th string, Hunter retuned all of the strings up a half step: F-A#-D# on the bass and A#-D#-G#-C on the guitar. As of 2008, he had once again retuned up another whole step: G-C-F on the bass and C-F-A#-D on the guitar.[9]

With Garage a Trois

This article uses material from the article Charlie Hunter from the free encyclopedia Wikipedia and it is licensed under the GNU Free Documentation License.

Gabriel Fauré Sicilienne
Update Required To play the media you will need to either update your browser to a recent version or update your Flash plugin.